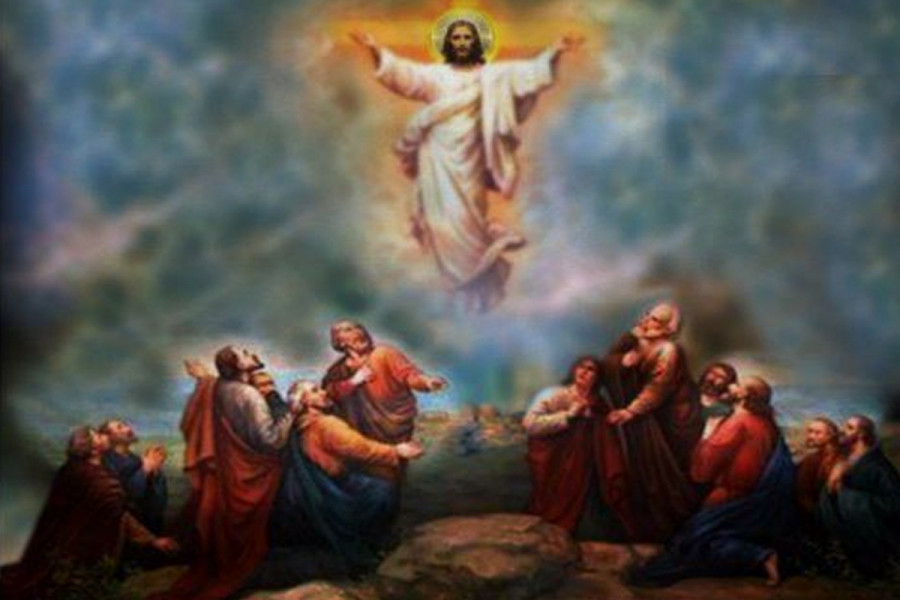 Ascension of the Lord

This Sunday's liturgy revolves around the figure of Christ who, enveloped in a cloud, ascends to heaven. Christ now sits on the right hand of the Father, but continues his mission in the Church through the Spirit. Beautiful image of the disciples, men of Galilee, who look up to heaven and are amazed because they no longer see Christ: only the Spirit will make them understand the perennial presence of Christ in the world.

In the first reading taken from the Acts of the Apostles, Luke specifies how in his Gospel he described everything that Jesus did and said during his earthly life, up to the day he ascended to heaven.  After his resurrection he appeared to the disciples many times during the next forty days with many trials and spoke to them about the kingdom of God, he ordered them not to go away from Jerusalem, because in a few days they would receive the Holy Spirit promised by the Father. Jesus' ascension into heaven marks the passage of witness from him to the Church, to all those who believe, like disciples, must bear witness to their beliefs with daily life.  The psalmist with the refrain of Psalm 46/47 " The Lord ascends amid songs of joy " wants to recall the great joy for Christ's resurrection and for his glorious return at the end of our life.

Paul defines himself as a "prisoner for the Lord's sake " ... and it seems that he is also very proud of it !!! After an adventurous start, Paul offers some very useful indications for living our baptism to the full, for a lifestyle in keeping with our vocation. To live well in the presence of God, Paul lists a series of virtues that we should cultivate in the garden of our heart: humility, magnanimity, gentleness, patience and finally the commitment to remain united.   The passage proposed for the solemnity of the Ascension of Jesus into heaven is taken from the final section of chapter 16 of Mark (v. 9-20), a composition added dating back to the second century and considered canonical since ever. It is a kind of summary of the stories of the appearance of the Risen Lord. Mark wishes to underline the importance of the mission that Jesus entrusts to his disciples at the moment of his farewell. The text, therefore, presents a vertical dimension, above us, Jesus seated at the right of the Father, but also a horizontal dimension, that of the mission. Its breadth embraces the whole world and every creature and is the fruit of Jesus' cooperation with men, who do not leave his friends' orphans (Jn 14:18).

Jesus trusts man, trusts those disciples whom he has just reproached because they are still incredulous about his resurrection (v.14). Against all human logic, to these men who have abandoned him, frightened and weak, he entrusts the task of proclaiming the Gospel, his word made flesh. Nothing else. He does not make a programmatic speech aimed at organizing a society in a new way but simply says: «Announce». The V. 16 seems to contradict what is been just said. The author of the text in fact uses the categories of oppositions so dear to the Jewish religion and still in use in the second century: good and bad; worthy and not worthy; pure and impure. But these are not the oppositions of Jesus, who demonstrated with his life that he only looks at the heart of man to whom he brings a message of light, of life, of love. Accepting or not accepting this message is the only criterion of salvation. And it depends on man, on his free choice.

Similarly, in verses 17 and 18, our author uses the colorful forms of the Eastern language to explain the effect on believers of welcoming the Gospel. They are at least singular expressions; in any case not to be taken literally, in a material sense. Their meaning must be sought from the perspective of faith which allows us to overcome the temptations of evil, makes us immune from the dangers that threaten our spiritual life, enables us to do good. The reality of man is a conflictual, hard reality, made up of tensions, enemies and difficulties. Here we talk about demons, snakes, poisons and diseases. Jesus does not guarantee us that we will not have difficulties, problems or critical situations. Jesus guarantees us that we will have the strength to face them because He is in us and with Him, everything can be faced.

The story continues with the ascension and enthronement of the risen Christ (Acts 1,9-11). It is the way to say that the Father has appreciated the work done by the Son on earth, and for this reason, he welcomes him to himself, assigning him the place of honor. Ascending to heaven, Jesus changed his condition and not so much place: he returned to his Father, but he is not far from each man and in particular from those who believe in him. Indeed, if Jesus with his mortal body could only be in one place, now due to the fact that he has entered the eternity of God he can be close to everyone at the same time.

The last verse sees the disciples who begin the journey to carry out the mission entrusted to them in word and deed. The Ascension, therefore, marks a turning point in the path of redemption, which from Jerusalem where it took place expands to a universal dimension; the hitherto compact group dissolves: while the Redeemer "leaves" towards heaven, the apostles each set off in a different direction. But they are not alone "The Lord acted together with them". This detail is of fundamental importance for Christians of all times. The presence of the Lord is alive and effective. His Word acts, it is the energy that moves the mission of the disciples throughout the world. By remaining in Christ, Christians do not run the risk of dispersing: faith and love keep them united, together with hope. The hope, in particular, of being recomposed in unity, in the presence of the One who preceded us all with his Father and our Father.

With the Ascension, the earthly mission of Jesus ends and that of the disciples begins, that is, that of the Church. But the horizontal dimension of the mission must never make us forget the vertical one. In fact, only those who maintain the relationship with the Lord through the Word can be his valid witness.It is necessary to convince ourselves that the Resurrection of Jesus and his Ascension into Heaven is not just a 'personal matter', as a demonstration of the power that God has over everything, even over death, but, He, God, became man. , to involve all of us, absolutely everyone, in His own fate. This is the great event of the Father's Love. We just have to look at our earthly life, not as an adventure, but as a value that truly brings us back to the reason why God created us: to learn to 'always be with Him' already here on earth, to be ready to 'be with Him eternally in Heaven. In this sense, the Ascension renews in the church the promise of the Lord of his "perfect and eternal presence, which is victory over absolute solitude, also and above all the triumph over that extreme solitude which is death".