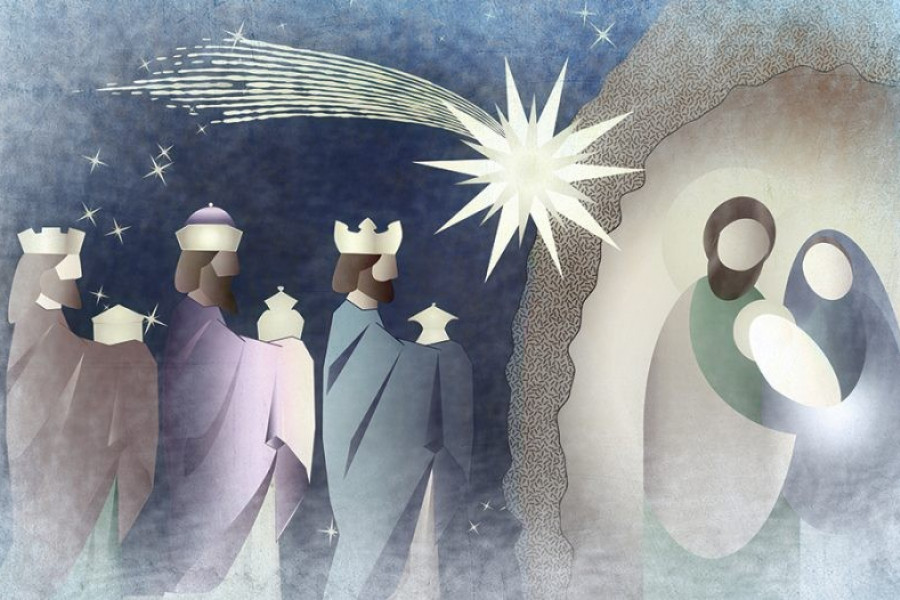 The Epiphany of the Lord

“Epiphany” means manifestation. And the “Epiphany of the Lord” is Jesus’ manifestation not only to these three Magi from the East, but it’s also a symbolic but real manifestation of the Christ to the whole world. These Magi, traveling from a foreign and non-Jewish nation, reveal that Jesus came for all people and all are called to adore Him.

God used what they were familiar with to call them to adore Christ. He used a star. They understood the stars and when they saw this new and unique star over Bethlehem they realized that something special was happening. So the first lesson we take from this for our own lives is that God will use what is familiar to us to call us to Himself. Look for the “star” that God is using to call you. It’s closer than you may think.

Magi fell prostrate before the Christ Child: They laid their lives down before Him in complete surrender and adoration. They set a perfect example for all. If these astrologers from a foreign land could come and adore Christ in such a profound way, we must do the same. Perhaps you could try literally lying down prostrate in prayer this day, in imitation of the Magi, or at least do so in your heart through prayer. Adore Him with a complete surrender of your life.

The Magi bring gold, frankincense, and myrrh: These three gifts, presented to our Lord, show that they acknowledged this Child as the Divine King who would die to save us from sin. Gold is for a King, frankincense is a burnt offering to God, and myrrh is used for one who would die. Thus, their adoration is grounded in the truths of who this Child is. If we are to adore Christ properly, we must also honor Him in this threefold way.

Jesus Christ, Our Lord and King is also the Son of God, fully Man and fully God: having human nature and divine nature united in His one person, and this is the truth about Himself, born of a woman and yet also the eternal God from before the beginning of time, the mystery of our faith revealed to us today. And the gift of frankincense was truly an acknowledgment that this Child born the Messiah was God Incarnate and ought to be worshipped.

The three gifts of gold, frankincense and myrrh are representative of the truth about the Messiah Whom the Magi paid homage to at Bethlehem, the King Whose coming was promised, Who is also Divine, Word of God, the Son of the Father Who assumed our human existence and flesh, all so that He could fulfill the completion of God’s plan to save us, by His suffering, Passion and death on the Cross.

This is completely contrary to the attitude of those to whom God had actually sent His Son to first, that is the Israelites. They have all known the prophecies and the promises of God, and yet many among them failed to believe or even refused to believe in Him. Some would even want to destroy Him and His works because they saw in the Lord Jesus a bitter rival for influence among the people of God. God has revealed His truth to them on many occasions and through many signs, but because they hardened their hearts, they did not have the faith.

Today on this Solemnity of the Epiphany, therefore, all of us are called to reflect on the faith that all of us have in the Lord, on whether we truly have faith in the Lord, believing in everything that He has revealed to us as we celebrate it in this Epiphany of the Lord. Through the Epiphany with the Wise Men or Magi, all of us are shown the wonderful manifestation of God’s love through Jesus Christ, Our Lord and Saviour, He Who is King as honoured by gold, Who is also God as worshipped by the frankincense, and Who will bear the Cross and die for our sake as anointed with the myrrh.

God has revealed the fullness of love to us through Christ, His Son, and we have heard how the Magi went on the arduous and long journey to seek Him. Such dedication can only happen when one has faith and love for God, that the person is able to do what he or she can do to follow the Lord and to seek Him out even through the trials and challenges present in our life. Are we able to have this same faith in us, brothers and sisters in Christ?

This Solemnity of the Epiphany is a timely reminder for us all to rediscover our faith and love for God, knowing first of all how He has loved us so dearly before everything else, that He gave us all the most wonderful gift of all, King, Lord and Saviour all in one. By His death and resurrection, Christ has saved us all from our certain destruction because of our sins and faults. He has given us everything so that we will not perish and have eternal life through Him. So, are we then able to dedicate ourselves to Him?

Invitation to grow in faith and learn to trust the Lord in all things: spending the time and effort to build a stronger and better relationship with God in each and every moment of our lives.

And as God has revealed Himself to us, let us all be witnesses to His truth and reveal Him to the nations and to all those who have not yet known Him. Let us all do this by our role model and good example, doing our best to live our lives according to our faith from now on. Those who see us will know of our faith, and through that, they will come to know God. Hopefully, like the Magi coming to see the Lord, many more people too will come to worship the Lord.