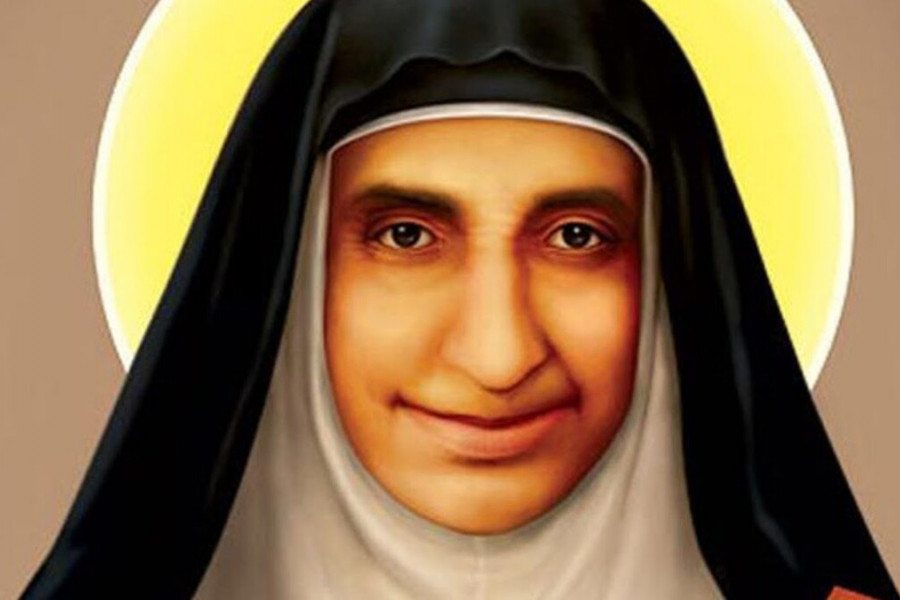 Saint Euphrasia is a humble CMC nun who has personalized the prayer heritage of Carmel and lived according to the divine inspirations and rose to the heights of sanctity. For all of us who are called to be the beloved of God that is to be saints(Rom: 1:7), the spirit-filled life of Bl. Euphrasia is an example and to take a peep into her holy life would be proper and useful. Rosa was born as the daughter of Elavuthinkal Antony and Kunjethi on 17 October, 1877 in Kattur which was in the undivided Trichur Diocese and now in the Diocese of Irinjalakuda. Besides three brothers, Rosa had a sister also, but she died in early childhood. Even in the midst of all wealth and pomp in the family, little Rosas heart desired only God. A good evidence of this is her offer of her virginity to God at the tender age of 9. After overcoming many obstacles she was able by the grace of God to become a member of the boarding of the kerala Carmelite Congregation in (founded by Bl. Kuriakose Elias Chavara in 1866) at Koonammavu. In those days the Koonammavu boarding was the only place of virtue where the girls who desire religious life can go. There the boarding started in 1868 was taught orderly life and education and practice of virtue besides other handicrafts also were taught. This was a very good training place for the girls who desired religious life. The Koonammavu convent was under the administration of Trichur Vicariate, started in 1887, but in the re-division of the vicariate (Trichur, Ernakulam, Changanassery) it came under the Ernakulum diocese. The first native Bishop of the Trichur diocese Mar John Menachery brought the sisters who belonged to Trichur diocese from Koonammavu. They were taken to the newly founded st. Josephs convent Ambazhakkad, the first Carmelite convent of the undivided Trichur diocese. Here on 10 May, 1897 the head-dress was given to Rosa Elavuthinkal who received the new religious name, Euphrasia of the sacred Heart of Jesus.

One of the important things that happened before coming to Trichur is to be noted here. This child, Rosa was always troubled by many serious sicknesses. From one such a very serious illness, she was saved by a miraculous vision of the Holy Family. The details of this vision and the reasons why she was allowed to continue in the convent were written in a letter by Sr Agnes, the then mother superior and sent through the sisters to Mar John Menachery the Bishop. This letter was the cause to have special attention towards this nun and also to cause the Bishop to order her to report her spiritual state truly to him regularly. This virtuous virgin after receiving the Carmelite dress from Mar John Menachery on 10 January, 1898 began to deepen in personal love for Lord Jesus. On 24 May 1900, the St. Marys convent Ollur was founded. That day itself Sr. Euphrasia along with others made her perpetual profession in this new convent and surrounded her whole self to Jesus.

The period from 1904-1910 when Sr. Euphrasia was the Asst. Superior of St. Marys convent Ollur and in-charge of the novices was a period of innumerable graces. When in the congregation officially novitiate was started it was Sr. Euphrasia who was selected to be the first novice mistress. It was at this time that the order of Mar John Menachery Mariam Thressia who is today among the blessed came to stay at the Ollur convent in order to discern her vocation. It was mother Euphrasia who was the novice mistress who gave the necessary formation to Mariam Thressia. More than mistress and disciple it was the coming together of two holy saintly souls guided by the Holy Spirit. In the deep experience of God both of them were great friends. Mother Euphrasia who was appointed superior of the St. Marys convent Ollur from 1913-1916 served the sisters under her authority in a very exemplary way. She was able to do loving and kind services to all those who came into contact with her because of the divine love she received from the Holy Eucharist and the Sacred Heart of Jesus and her devotion to Mother Mary.

Mother Euphrasia grew in humility, poverty and holiness as she completely obeyed the will of God every moment. The whole life of this virgin was full of continuous prayer, penance and reparation. Mother Euphrasia who found contentment in loving Jesus, her divine spouse was always in the forefront in receiving censure and abuses. All those who approached her she helped with motherly love, prayer and good advice. This prayer help she extended to souls in purgatory also. After a long life of 75 years, Euphrasia, the praying mother passed away in the convent at Ollur on 29 August, 1952. It was a wonder that the church bell at Cheralayam parish began to ring without stop at her death. To all those who prayed her intercession, the one who never forgets even after death, granted graces. God is revealing her great heavenly intercessory power through miracles and signs. This holy virgin who desired to become an unknown saint is raised today to the glory of the altar by the Almighty and the sweet fragrance of her sanctity is spread worldwide.