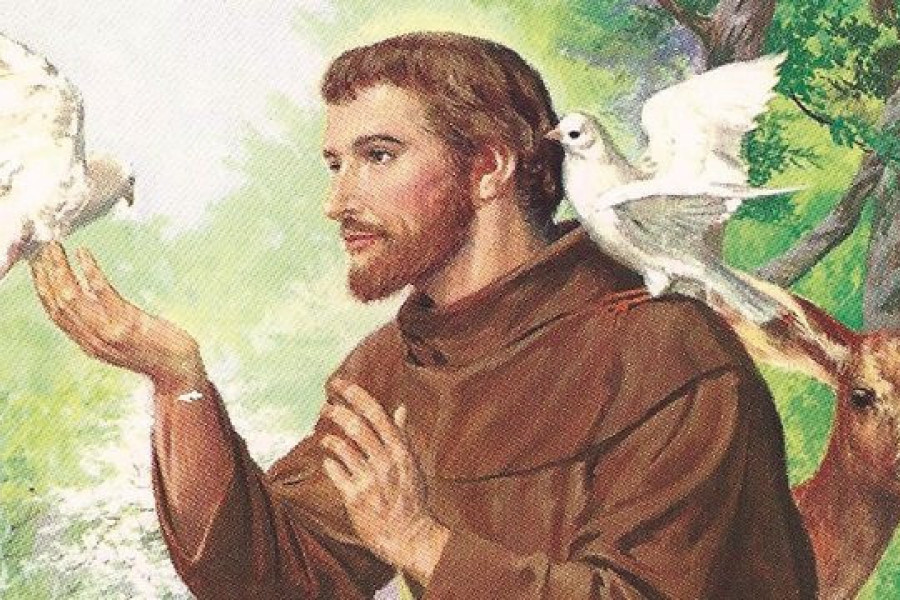 Saint Francis of Assisi abandoned a life of luxury for a life devoted to Christianity after reportedly hearing the voice of God, who commanded him to rebuild the Christian church and live in poverty. He is the patron saint for ecologists.

Who Was Saint Francis of Assisi?

Born in Italy circa 1181, Saint Francis of Assisi was renowned for drinking and partying in his youth. After fighting in a battle between Assisi and Perugia, Francis was captured and imprisoned for ransom. He spent nearly a year in prison — awaiting his father's payment — and, according to legend, began receiving visions from God. After his release from prison, Francis heard the voice of Christ, who told him to repair the Christian Church and live a life of poverty. Consequently, he abandoned his life of luxury and became a devotee of the faith, his reputation spreading all over the Christian world.  Later in life, Francis reportedly received a vision that left him with the stigmata of Christ — marks resembling the wounds Jesus Christ suffered when he was crucified — making Francis the first person to receive such holy wounds. He was canonized as a saint on July 16, 1228. During his life he also developed a deep love of nature and animals and is known as the patron saint of the environment and animals; his life and words have had a lasting resonance with millions of followers across the globe. Each October, many animals the world over are blessed on his feast day.

Born circa 1181, in Assisi, duchy of Spoleto, Italy, Saint Francis of Assisi, though revered today, began his life as a confirmed sinner. His father was a wealthy cloth merchant who owned farmland around Assisi, and his mother was a beautiful Frenchwoman. Francis was not in want during his youth; he was spoiled, indulging himself with fine food, wine, and wild celebrations. By age 14, he had left school and become known as a rebellious teenager who frequently drank, partied and broke the city curfew. He was also known for his charm and vanity. In these privileged surroundings, Francis of Assisi learned the skills of archery, wrestling and horsemanship. He was expected to follow his father into the family textile business but was bored by the prospect of life in the cloth trade. Instead of planning a future as a merchant, he began daydreaming of a future as a knight; knights were Medieval action heroes, and if Francis had any ambition, it was to be a war hero like them. It wouldn't be long before the opportunity for warfare beckoned. In 1202 war broke between Assisi and Perugia, and Francis eagerly took his place with the cavalry. Little did he know at the time, his experience with war would change him forever.

As Francis approached his death, many predicted that he was a saint in the making. When his health began to decline more rapidly, Francis went home. Knights were sent from Assisi to guard him and to make sure that no one from neighboring towns would carry him off (the body of a saint was viewed, at the time, as an extremely valuable relic that would bring, among many things, glory to the town where it rested).Francis of Assisi died on October 3, 1226, at the age of 44, in Assisi, Italy. Today, Francis has a lasting resonance with millions of followers across the globe. He was canonized as a saint just two years after his death, on July 16, 1228, by his former protector, Pope Gregory IX. Today, Saint Francis of Assisi is the patron saint for ecologists — a title honoring his boundless love for animals and nature. In 2013, Cardinal Jorge Mario Bergoglio chose to honor Saint Francis by taking his name, becoming Pope Francis.