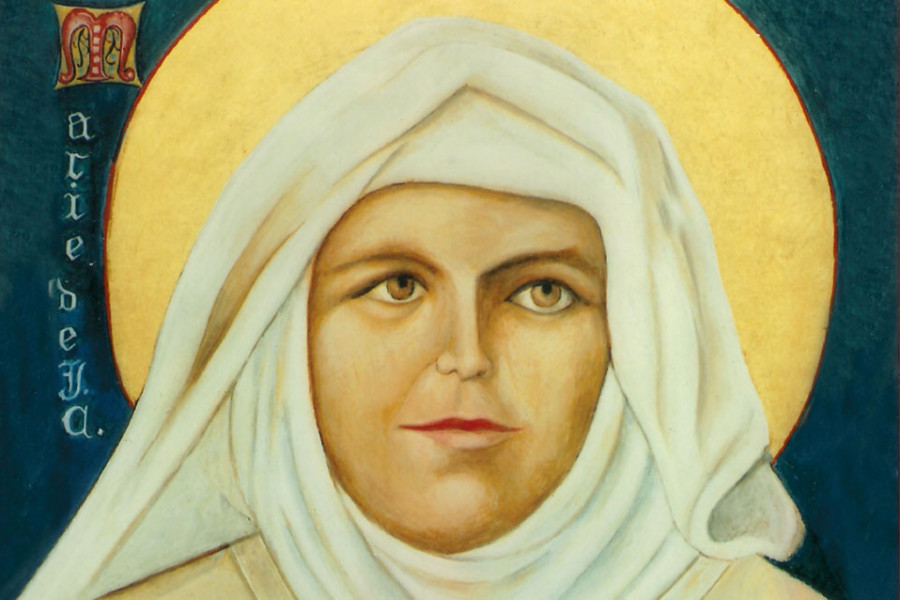 Mary of Jesus Crucified, a Carmelite Blessed, will be canonised on 17 May. In 1870, the Palestinian nun took part in the foundation of a Carmelite monastery in Mangalore, India. "We call on the 'little Arab' to pray for the Arab world, both Christian and Muslim," says prioress of the cloistered nuns of Baroda.

Mumbai (AsiaNews) - The canonisation of Carmelite nun Mary of Jesus Crucified (Mariam Baouardy) will be "an immense gift to the Church in the Middle East, and will instil hope and courage in the hearts and minds of suffering and persecuted Christians. We pray that her intercession will bring peace in that land torn by conflict," said Sister Marie Gemma OCD, prioress of the Carmelite monastery in Prem Jyot in Baroda (Gujarat), who spoke to AsiaNews about the Palestinian Blessed and mystic, who will be proclaimed saint by Pope Francis on 17 May.

Born in I'Billin (Galilee) on 5 January 1846, Mariam Baouardy came from a Catholic Greek-Melkite family of Lebanese origin. She lost her parents as a child and was adopted by a paternal uncle, with whom she moved to Alexandria in Egypt.

At 13, she ran away from home to avoid a marriage, but during her escape, she was attacked and almost killed by a Muslim, who wanted her to renounce her faith. She woke up in a cave, cared for by a woman whom she recognised as Our Lady.

After recovery, she left her adoptive family and travelled from Alexandria and Jerusalem. Eventually she went to Marseille (France) where, at the age of 19, she became a novice with the Sisters of St Joseph of the Apparition, who sent her to the Carmel of Pau (Pyrenees Atlantiques).

In 1870, she founded the Carmelite monastery in Mangalore (Karnataka). A year later, still in India, she pronounced her perpetual vows.

In 1875, she moved to Bethlehem, to found another monastery. Two years later, at the age of 32, she died from the consequences of a bad fall.

"Arab Christians are an important part of the history of the Church and their disappearance would be disastrous for the Arab people," said Sister Marie Gemma.

"May Sister Mary of Jesus Crucified pray for the Arab world, both Christian and Muslim. May she continue to inspire, guide and challenge us all the way to the heavenly Jerusalem. Let us learn from the life of the 'little Arab' Carmelite."