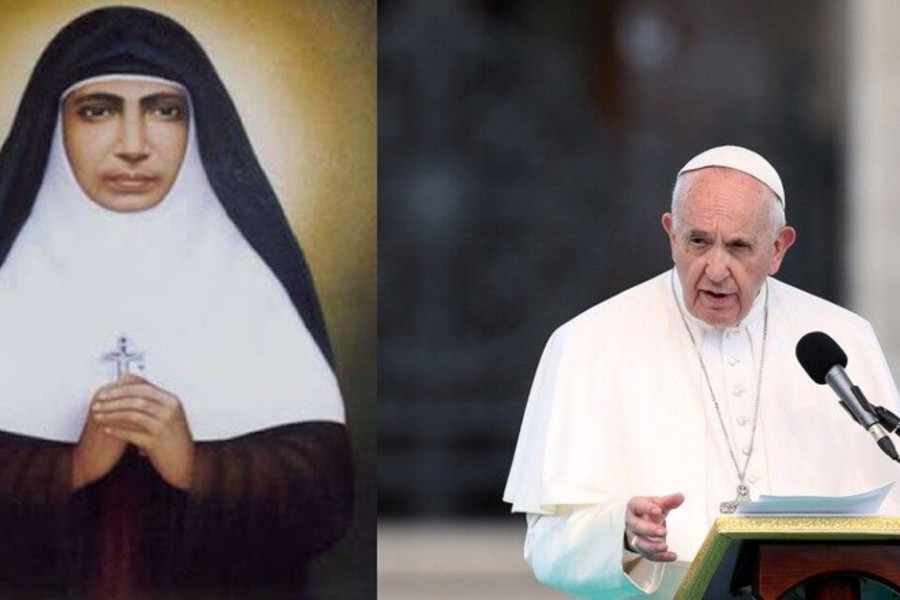 Thresia Chiramel Mankidiyan was born in Puthenchira in Irinjalakuda Revenue Division of Thrissur district on 26 April 1876 as the third of five children of Thoma and Thanda and was later baptized on 3 May 1876 at the church of Saint Mary; she was named in honor of Teresa of Ávila. Her paternal uncle Antony Chiramel Mankidiyan was her godfather and his wife Anna was the godmother. Her family was once rich though became poor when her grandfather married off seven daughters after selling property for each costly dowry; this led to her brothers and her father taking up drinking.

Her mother was her father's second wife; her father's first wife Mariamkutty died during childbirth in 1872. She had two sisters and two brothers and were in exact order: Porinchu, Mariamkutty, Ouseph and Ittianam – she was born in between Mariamkutty and Ouseph.

In 1884 her mother tried in vain to dissuade the pious girl from her severe fasts and night vigils. Her mother died on 2 March 1888 after blessing her children who gathered at her deathbed. Her mother's death marked the conclusion of her studies and she instead dedicated herself to contemplation in her local parish church. She made a private vow to remain chaste in 1886.

In 1891 she hatched a scheme to sneak from home to lead a life of penance in the hills but soon decided against this and instead returned home. Since 1904 she desired to be called "Mariam" under the belief she had a vision from the Blessed Virgin Mary in which she was instructed to add it to her name. From 1902 to 1905 she was subjected to several exorcisms from Joseph Vithayathil – under the orders of the local bishop – and from 1902 it was Vithayathil who became her spiritual director until her death.

In 1903 she requested John Menachery – the Archbishop of Thrissur – to build a house of retreat but it was turned down. This happened after she had formed a group with three other friends and engaged in apostolic work with poor families. Menachery instead suggested she make an effort to join a religious congregation and encouraged her to join the new Congregation of the Franciscan Clarists but left since she didn't feel called to it. Mankidiyan later accepted the John Menachery's request in 1912 to join the Carmelites at Ollur and was there since 26 November 1912 until she left on 27 January 1913 because she did not feel drawn to them either. In 1913 she set up a house at Puthenchira and on 14 May 1914 founded the Congregation of the Holy Family to which she was professed in and vested in its habit; she was the first superior of the order.