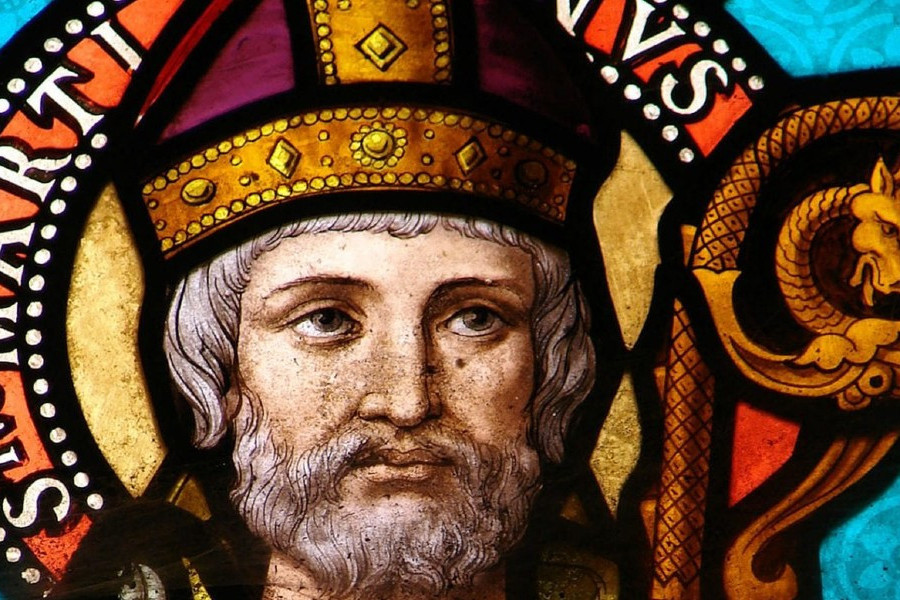 Of pagan parentage, Martin chose Christianity at age 10. As a youth, he was forced into the Roman army, but later—according to his disciple and biographer Sulpicius Severus—he petitioned the Roman emperor Julian the Apostate to be released from the army because “I am Christ’s soldier: I am not allowed to fight.” When charged with cowardice, he is said to have offered to stand in front of the battle line armed only with the sign of the cross. He was imprisoned but was soon discharged.

Legend holds that while he was still in the military and a catechumen of the faith, Martin cut his cloak in half to share it with a beggar. That night, he dreamed that Jesus himself was clothed with the torn cloak. When he awoke, the garment was restored. Moved by this vision and apparent miracle, Martin immediately finished his religious instruction and was baptized at age 18.

On leaving the Roman army, Martin settled at Poitiers, under the guidance of Bishop Hilary. He became a missionary in the provinces of Pannonia and Illyricum (now in the Balkan Peninsula), where he opposed Arianism, a heresy that denied the divinity of Christ. Forced out of Illyricum by the Arians, Martin went to Italy, first to Milan and then to the island of Gallinaria, off Albenga. In 360 he rejoined Hilary at Poitiers. Martin then founded a community of hermits at Ligugé, the first monastery in Gaul. In 371 he was made bishop of Tours, and outside that city he founded another monastery, Marmoutier, to which he withdrew whenever possible.

As bishop, Martin made Marmoutier a great monastic complex to which European ascetics were attracted and from which apostles spread Christianity throughout Gaul. He himself was an active missionary in Touraine and in the country districts where Christianity was as yet barely known. In 384/385 he took part in a conflict at the imperial court in Trier, France, to which the Roman emperor Magnus Maximus had summoned Bishop Priscillian of Ávila, Spain, and his followers. Although Martin opposed Priscillianism, a heretical doctrine renouncing all pleasures, he protested to Maximus against the killing of heretics and against civil interference in ecclesiastical matters. Priscillian was nevertheless executed, and Martin’s continued involvement with the case caused him to fall into disfavour with the Spanish bishops. During his lifetime, Martin acquired a reputation as a miracle worker, and he was one of the first nonmartyrs to be publicly venerated as a saint.