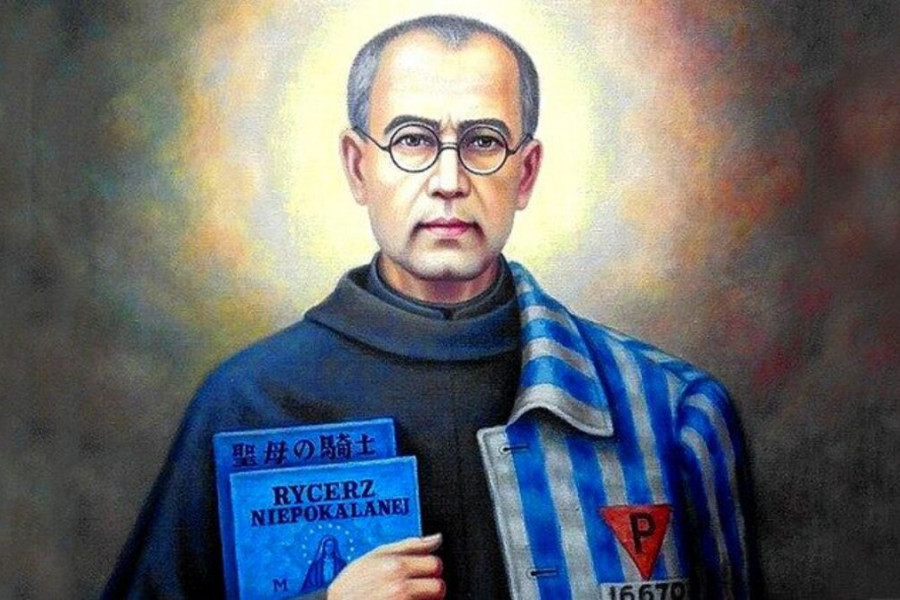 Raymond Kolbe was born on January 8, 1894, in Zdunska-Wola, Poland.
Even though he was a lively and clever child, he felt drawn to follow the Lord and love the Immaculata who had offered him two crowns: one white, symbolizing purity, and the other red, symbolizing martyrdom.
As a young boy, he joined the Conventual Franciscan Friars and received the religious name Maximilian. Shortly after, he was sent to Rome to complete his studies in philosophy and theology.
Polish by birth but universal in spirit he took inspiration from the most authentic Marian tradition of his Franciscan Order.
On October 16, 1917, he established the Militia of the Immaculata, a public association of the faithful, which is international and universal. Its spirituality consists in living a total consecration to the Immaculata in order to attain, after her example, a more perfect union with Christ and in order to collaborate with her for the spreading of Christ's Kingdom in the world.
Ordained a priest in 1918, Fr. Maximilian returned to Poland and began his ceaseless missionary activity.
He not only started publishing a monthly magazine –Rycerz Niepokalanów (The Knight of the Immaculata) – but, in 1927, he also established Niepokalanów (the City of the Immaculata), where over 700 friars, totally consecrated to Mary, devoted themselves to various evangelization activities, especially to the apostolate of the printed word.
In 1930, moved by the desire to lead the whole world to Christ through Mary, he went to Japan to establish a second City of the Immaculata, Mugenzai no Sono, close to Nagasaki.
Suffering from tuberculosis, he returned in 1936 to Poland and spent himself for the spiritual and apostolic development of Niepokalanów which had become the most prominent Catholic publishing house in Poland.
In 1939, when World War II broke out, Niepokalanów, damaged by bombs, was used as a hospital and refuge for thousands of refugees, including Jews.
Maximilian continued his press apostolate until February 17, 1941, when he was arrested and imprisoned in the Pawiak prison, near Warsaw. On May 28, 1941 he was permanently transferred to the Auschwitz concentration camp, where inhumane conditions and hard labor awaited him.
With his customary simplicity and determination, Maximilian, prisoner 16670, continued to be an instrument in the hands of the Immaculata in the midst of his fellow prisoners.
Giving heroic witness to the Gospel of charity, he freely offered his own life for an unknown prisoner who had been condemned to death in the starvation bunker. His motto was “Only love creates.”
After nearly two weeks of intense sufferings, he was killed by an injection of carbolic acid on August 14, 1941, the eve of the Solemnity of the Assumption of Our Lady into Heaven. On August 15, his body was cremated and his ashes were scattered to the wind.
His holiness and his spiritual and apostolic legacy have since spread throughout the world.
On October 10, 1982, John Paul II proclaimed him a Saint, as a Martyr of Charity.