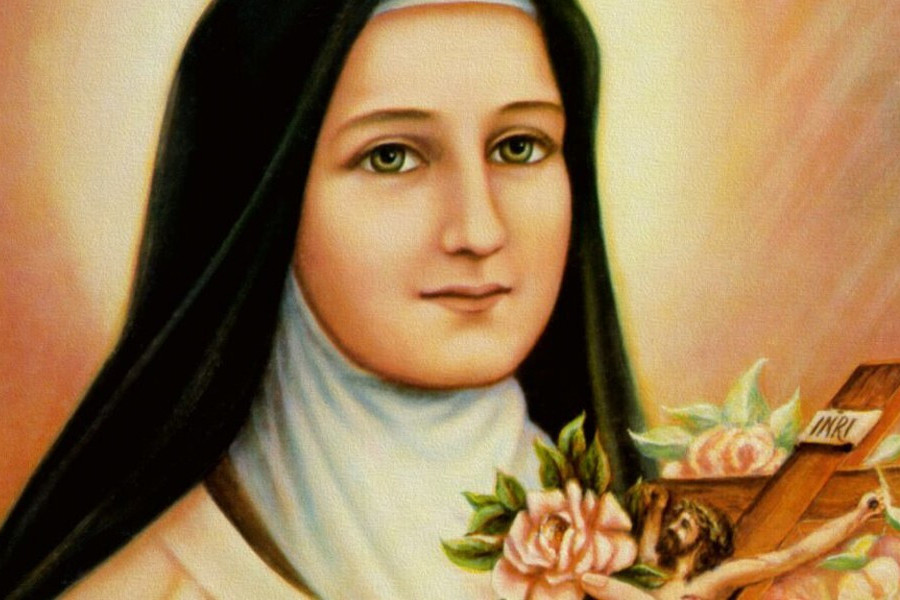 Biography of St. Therese of LIsieux

THÉRÈSE MARTIN was born in Alençon, France on January 2, 1873. Two days later, she was baptized Marie Frances Thérèse at Notre Dame Church. Her parents were Louis Martin and Zélie Guérin. After the death of her mother on August 28, 1877, Thérèse and her family moved to Lisieux. After an intense preparation by the Benedictine Nuns of Lisieux culminating in a vivid experience of intimate union with Christ, she received First Holy Communion on May 8, 1884. Some weeks later, on June 14th of the same year, she received the Sacrament of Confirmation.

She wished to embrace the contemplative life, as her sisters Pauline and Marie had done in the Carmel of Lisieux. However, she was prevented from doing this because she was too young. During an audience granted by Pope Leo XIII, she asked the Holy Father with childlike audacity to be able to enter the Carmel of Lisieux at the age of fifteen.

On April 9, 1888, she entered the Carmel of Lisieux. She received the habit on January 10th of the following year, and made her religious profession on September 8, 1890 on the Feast of the Birth of the Blessed Virgin Mary. In Carmel she embraced the way of perfection outlined by the Foundress, Saint Teresa of Jesus, fulfilling with genuine fervour and fidelity the various community responsibilities entrusted to her. In her autobiographical manuscripts she left us not only her recollections of childhood and adolescence but also a portrait of her soul, the description of her most intimate experiences. She discovered the little way of spiritual childhood and taught it to the novices entrusted to her care. She penetrated ever more deeply into the mystery of the Church and became increasingly aware of her apostolic and missionary vocation to draw everyone in her path. She completed her first autobiographical manuscript on January 21, 1896.

Several months later, on April 3rd, in the night between Holy Thursday and Good Friday, she suffered a haemoptysis, the first sign of the illness that would lead to her death; she welcomed this event as a mysterious visitation of the Divine Spouse. From this point forward, she entered a trial of faith which would last until her death; she gives overwhelming testimony to this in her writings. In September, she completed Manuscript B; this text gives striking evidence of the spiritual maturity which she had attained, particularly the discovery of her vocation in the heart of the Church.

While her health declined and the time of trial continued, she began work in the month of June on Manuscript C. New graces led her to higher perfection and she discovered fresh insights for the diffusion of her message in the Church, for the benefit of souls who would follow her way. Throughout July, August and September her suffering and trials intensified. She accepted them with patience up to the moment of her death in the afternoon of September 30, 1897.

Pope Pius XI canonized her on May 17, 1925. On December 14, 1927, St. Therese was proclaimed a Universal Patron of the Missions. After an exhaustive study into the suitability of proclaiming St. Therese of the Child Jesus and of the Holy Face a Doctor of the Universal Church, she was bestowed that honor by Pope John Paul II on October 19, 1997.