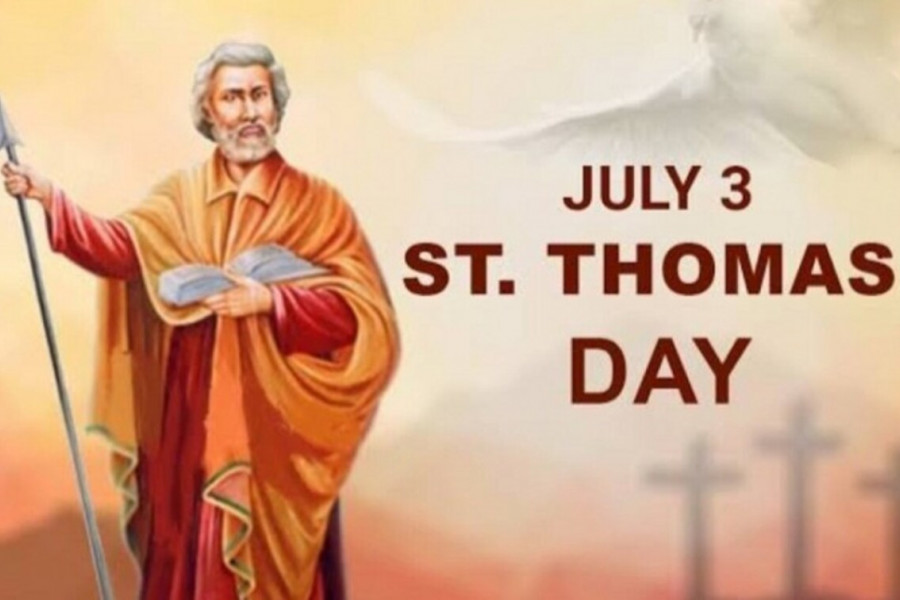 Birth Unknown
Death Stabbed with a spear c.72 in India

Little is recorded of St. Thomas the Apostle. Thomas was probably born in Galilee to a humble family, but there is no indication that he was a fisherman. He was a Jew, but there is no account of how he became an apostle to Christ. Nevertheless, thanks to the fourth Gospel his personality is clearer to us than some of the other Twelve. Thomas’ name occurs in Matthew (10:3), Mark (3:18), Luke (6) and Acts of the Apostles (1:13), but in the Gospel of John he plays a particularly distinctive part. Thomas is often condemned for his lack of belief, but Thomas was equally courageous, willing to stand by Jesus in dangerous times. He also relentlessly sought the Truth. Like an inquisitive child, he constantly asked questions. And, his wonderful profession, “My Lord and my God,” is the clearest declaration of Jesus’ divinity in Holy Scripture.

Thomas,LoyalFollower
When Jesus announced His intention of visiting the recently deceased Lazarus in Judea—a few miles from Jerusalem and dangerously close for someone as unpopular as He—Thomas said to his fellow disciples: “Let us also go, that we may die with him” (John 11:16). When the worried disciples wanted to keep Jesus from going for fear He would be stoned, Thomas, in a moment of bravery not often expressed by the Apostles before Pentecost, rallied the others to stay by their Master come what may.

Thomas,DoubtingApostle
Lastly, and more famously, St. Thomas is remembered for being absent from the Upper Room the first time Jesus appeared to the disciples after His Resurrection. Thomas dismissed the accounts of the others by saying, “Unless I see the mark of the nails in His hands and put my finger into the nail marks, and put my hand into His side, I will not believe” (Luke 20:25). Eight days later Thomas made his act of faith. He fell at the feet of Jesus and said, “My Lord and my God!” and Jesus replied, “Because you have seen me, Thomas, you believed. Blessed are they that have not seen, and yet believe” (John 20:25-29). This incident gave rise to the expression “doubting Thomas.”

Thomas,ReluctantMissionary
Accounts of Thomas’ missionary activities are unreliable, but the most widely accepted report holds that he preached in India, although he was reluctant to start the mission. According to the Acta Thomae, the apostles divided up the world for their missionary labors, and India fell to Thomas. However, Thomas claimed that he was not healthy enough and that a Hebrew could not teach Indians; even a vision of Christ could not change his mind. Christ then appeared to a merchant and sold Thomas to him as a slave for his master, a king who ruled over part of India. One story suggests that Thomas offered to build a palace for the Indian king that would last forever. The king gave him money; which Thomas gave to the poor. Asked to show his progress, St. Thomas explained that the palace he was building was in heaven, not on earth. Ultimately, after giving into God’s will, Thomas was freed from slavery. He planted seeds for the new Church, forming many parishes and building many churches along the way.

To this day, Saint Thomas is venerated as the Apostle of India. In fact, there exists a population of Christians along the Malabar Coast, on the western coast of India, who lay claim to conversion by St. Thomas. Their tradition holds that he built seven churches, was martyred during prayer by a spearing on the “Big Hill” near Madras, and was buried in Mylapore, on the east coast of India. Ultimately, St. Thomas’ remains were transported to Ortona, Italy, where they reside today.