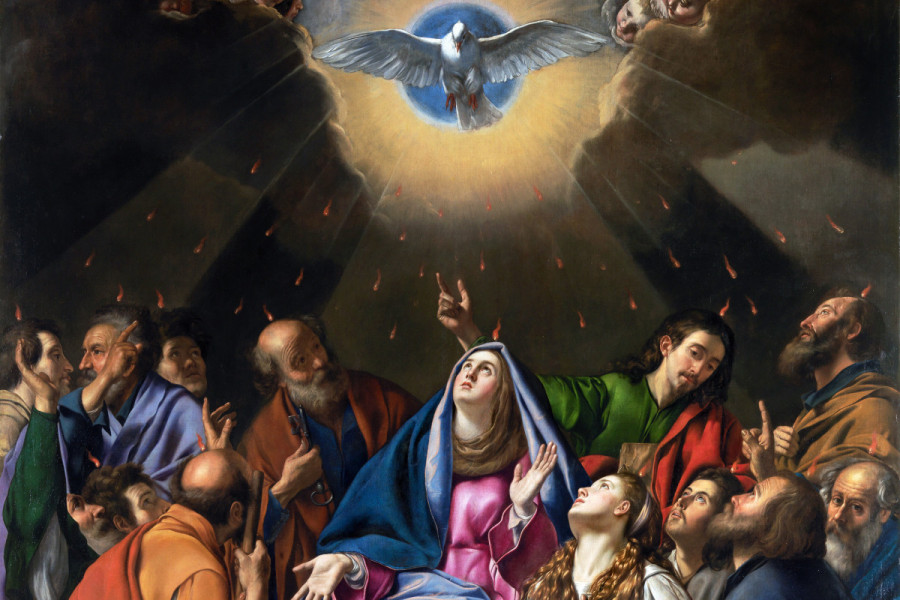 The Gospel of John in chapters 14 and 16 offers a reading of the Last Supper of Jesus with his disciples. In this text we find many indications on the gift of the Holy Spirit and on the work he does. For Pentecost Sunday of cycle B we are offered texts on the Spirit that take up the theme of witness and truth. The Gospel text should be read in parallel with the other readings proposed: that from the book of the Acts of the Apostles (2,1-11) and the epistle of Saint Paul to the Galatians (5,16-25); to understand the indication of the Spirit as the new law of the Christian, the liturgical context, the feast of the Jewish Pentecost and the reference to the gift of the law are important.

v.15,26 When the Paraclete comes, whom I will send to you from the Father, the Spirit of truth who proceeds from the Father, he will give testimony to me; The term parāklētos is in John a typical name of the Holy Spirit (cf. 14,26) even if its proper meaning is not certain. Unlike Mark, who often uses the term pneumatos, John wants to present the Spirit to us as the Ruha of Genesis that hovers over the waters. The title Spirit of Truth is also articulation proper to the fourth Gospel and this qualification was chosen to underline the specific activity of the Holy Spirit in the world and among believers. In this verse the sending of the Spirit is announced, but unlike 14,16.26, it is Jesus himself who sends him, from the Father; this indicates both the origin of the Spirit and the place from which Jesus sends him. Although the work of the Spirit also appears in the synoptic in texts announcing the persecution of believers (we recall that Jn 15: 18-25 has just spoken of the world's hatred for those who believe in Christ; cf. Mt 10,20s; Lk 12 , 12; Acts 6:10) here does not seem to be dealing with the same thing. In fact, John does not speak of specific processes or actions. The witness of the Spirit is addressed directly to the world, in favor of Jesus, as well as to believers, to support their proclamation.

v.15,27 and you also bear witness, because you are with me from the beginning. This witness is both of the Spirit and of the disciples, as John had previously affirmed that the Father bears witness to Jesus (cf. 5,32.37; 8,18-18). The disciples are with Jesus from the beginning, understood as the stable condition of those who believe, of those who have been chosen, therefore every Christian. Precisely because the believer is with Jesus he can, strengthened by the Spirit, bear witness to the truth. But the testimony of the disciples and of the Spirit are not independent; the former give voice to the Spirit. As Saint Augustine said: “The Spirit speaks to the heart, in words through inspiration and through sounds”.

v.16,12 I still have many things to tell you, but for the moment you are not capable to bear it now.The passage combines the two previous verses of chap. 15 the last text on the Spirit, in chap. 16; we understand in the first place that there are two times. That of Jesus and that of the Spirit. Now the disciples cannot yet understand the many other things that Jesus has to say to them, since Jesus has not yet lived his Passover (cf. 16,7). The whole of revelation, announced in 15:15, cannot be fully understood, in depth: this will be the work of the Spirit.

v.16,13 When he comes, the Spirit of truth, he will guide you to all the truth, because he will not speak of himself, but will say everything he has heard and will announce future things to you.It will be the Spirit who guides us (cf. Ex 15:13; Is 49.10; Ps 24.5; Wis18.3 for the theme of God guiding his people) to the whole truth. What does it mean? Not only that the Spirit will make us understand the past of Jesus, but also his present condition, as a glorified Son, that is, the fullness of the mystery of Jesus Christ (the truth, in the singular).The action of Jesus and the Spirit indicated as disjoint, is now reunified; how Jesus did not speak for himself, but his authority came from the Father; as Jesus himself listens to the Father (8,26; cfr. 5,19; 8,28), so the Spirit listens to Jesus. The verb to announce (anaggéllein ) which is repeated three times in these last three verses, means to reveal an unknown thing, but the prefix ana indicates that it is a repetition. The speaker announces something that he has in turn received. Again, therefore, the Spirit does not speak for himself, but repeats what Jesus said.The future things announced by the Spirit are not predictions, rather the ability to understand and face future events in the history of the community of believers. We could better translate it will tell you, which is also better suited to the next two verses, where the verb is repeated.

v.16,14 He will glorify me, because he will take from what is mine and will announce it to you. Indeed, the Spirit will communicate to believers what belongs to Jesus, his patrimony we could say: that is, a knowledge of him, but also participation in his own life.By doing this he will glorify the Son, whose mission had as its purpose the participation of believers in the eternal life of the Father and the Son (cf. 3,16; 10,28); the idea will be clarified in the following chapter, "I have given them the glory that you have given me... the love with which you have loved me, be in them and I in them" (cfr. 17,22.26).

v.16,15 All that the Father possesses is mine; that is why I said that he will take from what is mine and will announce it to you.The clarification of the union between Father and Son brings us back to the unity of essence and action of the Trinity (cf. 5.26; 17.5.10.24); the revelation of the Father through Jesus continues, it is unique but transmitted in two different ways, First from the Son, then from the Spirit and from the Church that welcomes him. How is the Spirit different from Jesus? It is "other" in its duration, which is definitive, and in its way of acting: no longer through words, but through evidences that give meaning to Jesus' words and show their current significance.