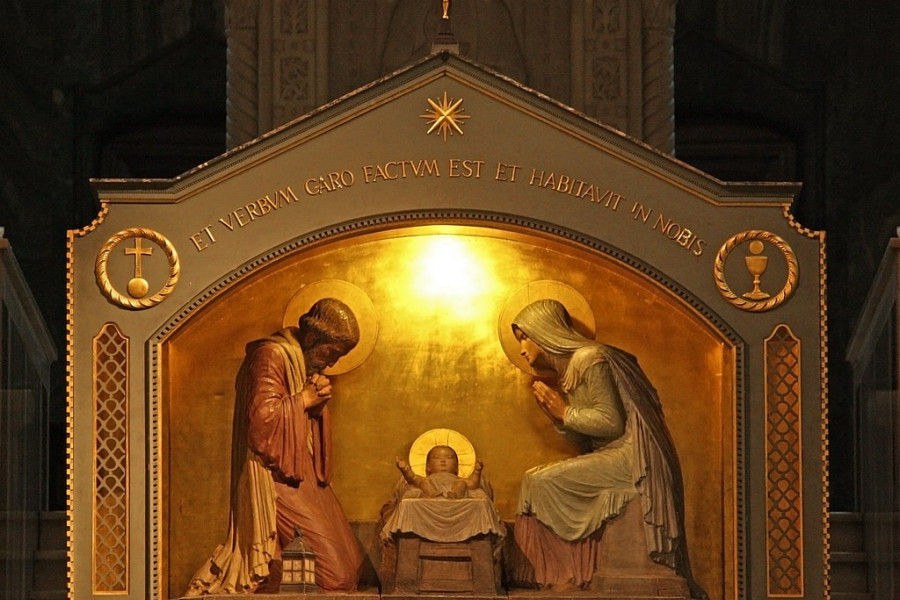 The Feast of Holy Family

The devotion to the Holy Family was born in Bethlehem, together with the Baby Jesus. The shepherds went to adore the Child and, at the same time, they gave honor to His family. Later, in a similar way, the three wise men came from the East to adore and give honor to the newborn King with gifts of gold, frankincense, and myrrh that would be safeguarded by His family.

Today’s celebration demonstrates Christ’s humility and obedience with respect to the fourth commandment, whilst also highlighting the loving care that His parents exercised in His keeping. Looking at the Holy Family, we see the love, the protection, and the diligent care that they gave to the Redeemer. We cannot fail to feel uneasiness, perhaps a shameful thought, for the times in which we have not rendered the appropriate care and attention to the Blessed Eucharist. We can only ask for forgiveness and do penance for all the sacrilegious acts and the lack of respect that is committed in front of the Blessed Eucharist. We can only ask the Lord, through the intercession of the Holy Family of Nazareth, for a greater love for their Son Incarnate, who has decided to remain here on earth with us every day until the end of time.

The Lord honours the father in his children and upholds the rights of a mother over her sons. Whoever respects his father is atoning for his sins, He who honours his mother is like someone amassing a fortune. Whoever respects his father will be happy with children of his own, he shall be heard on the day when he prays. Long-life comes to him who honours his father, he who sets his mother at ease is showing obedience to the Lord. My son, support your father in his old age, do not grieve him during his life. Even if his mind should fail, show him sympathy, do not despise him in your health and strength; for kindness to a father shall not be forgotten but will serve as reparation for your sins.

In order to spread the human race, God created the family as its first unit. In the family, the father has the place of honor and the right to respect and obedience and the mother shares the authority with the father in the home. It is the will of God that the authority of the parents should be respected. And the children who respect and obey their parents are doing God’s will and are thereby giving glory to God and storing up the spiritual reward for themselves. The children who respect their parents will, in turn, be respected by his/her own children and their prayers will be answered.

This reading is a profound lesson for both parents and children. If the parents fail to do what is right and just in the sight of God they can hardly complain if their children turn out disobedient to God and to them. The children learn more from examples. If the parents give their children the example of a life of obedience to the laws of God, the children will, in turn, carry out their duties to God, to their parents and to their fellowmen. On the feast day of the Holy Family, the only perfect family that ever lived on this earth let us ask ourselves how we are fulfilling our responsibilities which God has placed on us.

St. Paul gives some practical rules for an ideal Christian life. These are the Christian virtues so necessary in the world today. Because our world is rapidly sinking back today to the evils of vice and worldliness, a paganism more dangerous than that of St. Paul’s time. The pagans of the Roman Empire were tired of vice and worldliness and they were looking for the truth and real purpose of life. They found it in Christianity and cherished it.

What was once the Christian world today is divided into two opposing factions, one side those who openly deny the existence of God and a future world, another side who don’t care whether God exists and care only for the wealth and pleasure of this world. Both groups have the same idols –themselves. The true Christians find the practice of their Christian life is difficult today, the wind of falsehood is blowing on us from all sides. Nothing can save the world other than a return to the Gospel of Christ and to the virtues that the gospel demands. Where God is forgotten there is no real happiness for the human being. Where peace of Christ does not reign there is nothing but strife and hostility among people. The present world is already in hell lacking faith and hope in the future life.

Let us try to have true peace of Christ in our hearts and in our home each one carrying out the task God has allotted to him or her. The world is the sum-total of its individual families.

Herod, the King in Jerusalem, had heard that the Messiah, the “King of the Jews” was born. He saw in this birth a danger to his own position. So he determined that the newly-born Messiah would never reach the throne. To avoid newly-born Messiahs murder at the hands of Jealous Herod the Holy family flees to Bethlehem and becomes displaced persons in a pagan and foreign land. The earthly woes and sufferings did not spare the Holy Family too. The long journey they made across the desert was a frightening, exhausting and dangerous experience. The search for someplace to live in a foreign land, the difficulty for Joseph to find their livelihood in an unfriendly land must have been the unforgettable experiences that the Holy Family experienced.

Why did God allow this to happen to his dearest and nearest friends on earth? It is for our sake. He sent His Divine Son to bring us back to heaven and He chose life for Christ. As well as for his blessed Mother and his foster father St. Joseph, which would be a model and source of encouragement for the lowliest and the poorest and the most persecuted of all who would ever be his followers.

The message of Today is a message of encouragement and consolation for everyone. If the holiest and greatest family that ever lived on earth suffered such trials and hardships all for our salvation, surely we should be ready and willing to suffer and bear with the trials that God sends us for our own eternal welfare.