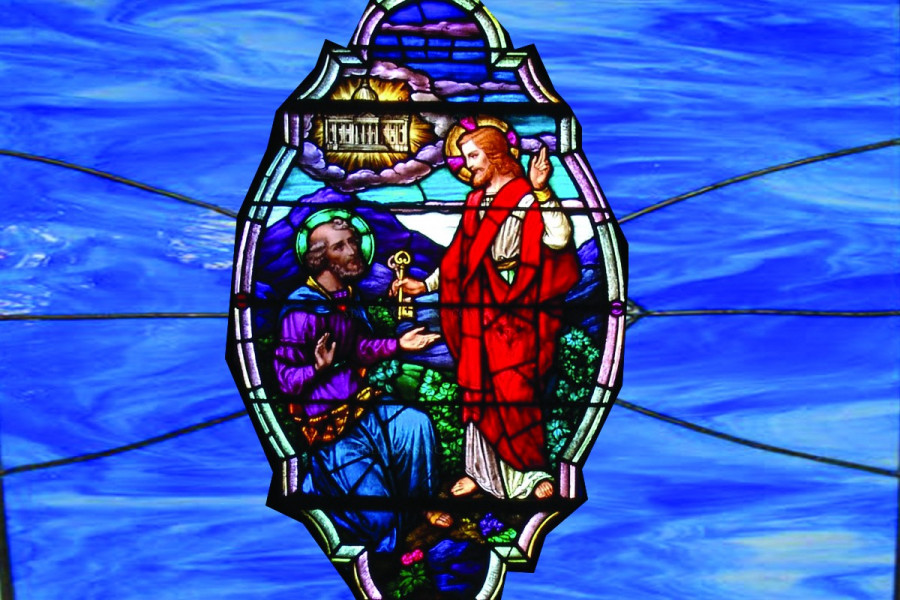 The liturgy of the 21st Sunday of the ordinary time helps us to reflect on God’s boundless mercy on the human family. God is the saviour and the King of the universe, he needs no support from us yet he assigned his authority to human beings so to involve us with his work of salvation.

In the first reading, we come across a character named Shebna in Isaiah’s day wherein he was an official of the state he was correct so God sends the message telling that he will be dethroned and his position will be given to another person named Eliakim which also ends up in a tragedy that Eliakim also became a selfish and corrupt one. Through the plan is a failure one yet the essence of its idea slightly connected with the Gospel of the day where Peter proclaims Jesus as the “Messiah the Son of the living God” 16:16. It is affirmed in the second reading of St. Paul to Romans with these words “O the depth of the riches and wisdom and knowledge of God! How unsearchable are his judgments and how inscrutable his ways! “11:33. In these words, it reveals that God’s ways are perfect, strong, and firm like the rock. He doesn’t require our guidance and council because whatever a human thinks, speaks, or does is from the wisdom or foolishness of God.

One of the most interesting characters in the Gospel is surely Peter. Amazingly, Christ picked him to be the leader of his Church.

However, what is fascinating is to watch the way Christ dealt with him. How patient he was. How he helped him to grow into the man who was ready to lay down his life for him, and who eventually did. But this growth was a gradual thing. There were many regressions. But this shouldn’t surprise us, for this is how growth happens. Let us, therefore, take a closer look at the relationship between Christ and Peter. It will help us to grow in closeness to Christ. It will teach us how best to help those whom we love to grow.

It all began with the fact that Christ called him. He did so because he obviously saw potential in him. We all need someone to believe in us.

Peter wasn’t sure that he deserved this call. After the miraculous catch of fish, he said: Lord, depart from me, for I am a sinful man. Christ did not deny that Peter was a sinner, but he challenged him to reach out, to go forward. We have to be challenged if we are to grow. Demands have to be made on us. Not to demand anything from someone is to condemn that person to sterility.

Christ involved him in his work. He made him a partner in it, not a mere messenger boy. Responsibility helps people to grow.

He asked him to declare his loyalty: will you also go? Thus, Peter was forced to look into his own heart. He had to stand on his own feet, this helps for the growth.

And we see the same Peter without Christ how trembling or shaking for example walking on the water, in the denial of Jesus on the way to Calvary and when Jesus rebukes Peter and so on. Scholars say Jesus used the word rock addressing to Peter as a wordplay. When we think about rock, we imagine as strong, huge and unshakable object, but in reality, Peter was vulnerable, coward and word slipping personality. Therefore, the word rock meant for him might be of a verb that is rocking which means shaking terribly, non-reliable and weak.

Here the rock is Jesus himself and Peter as the stone of that strong foundation of which the cornerstone is Christ. We have the references in (1Cor 3:11, eph:2:2-20, 1Pt:2:4-6) so Jesus doesn’t call Peter you are rock but it can be a wordplay to mean away from Christ we will be rocking or stumbling, trembling terribly but build on him, unshakable rock through faith.

God my merciful Messiah! Let the spirit of Father prompt our every action, Word and thought so to proclaim to the despaired World the hope of your power of salvation. Let us realize the truth that you are the Rock of the household of God and we need to be united with you to spread your Kingdom in the world. Amen.