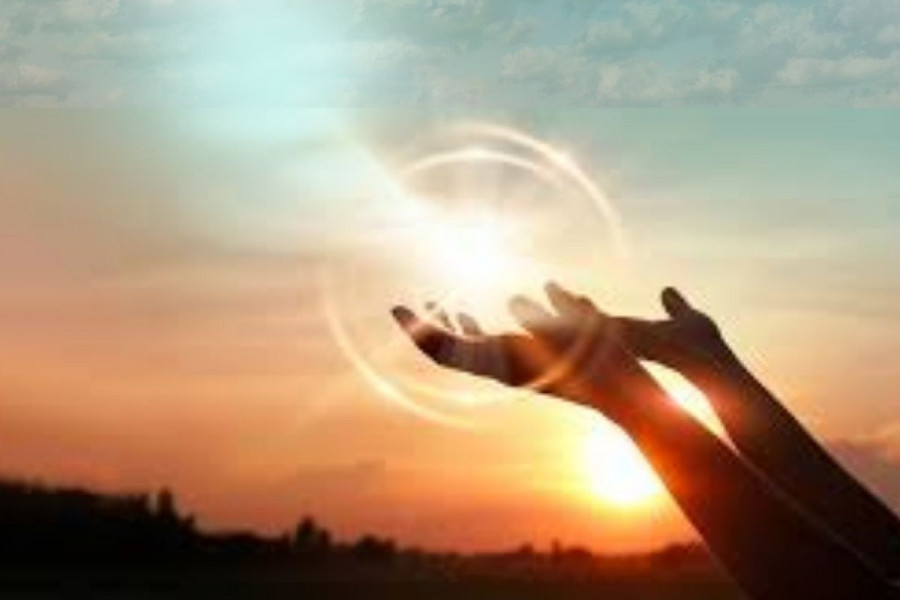 The first reading is taken from Isaiah; the prophet gives us his most intimate experience, which is that of being pervaded, inhabited by the Spirit of the Lord God. “The Spirit of the Lord God is upon me”. This experience transforms his identity, making him the property of the Lord, the place where God manifests himself: "He has anointed me".The anointing is an ancient rite by which either the king or the high priest is consecrated. It confers a precise mission, "he has sent me". Seven purposes are described, summarized in the first assignment: "Bringing the good news to the poor". Who are the poor? All people without political power, social prestige, material resources, and who have the Lord as their only support, in total abandonment to him. The good news concerns a community that has the Lord as the only good and which experiences the painful wounds of its history, "broken hearts".

In fact, the prophet's mission is to help the people rediscover their identity, their freedom, without letting themselves be crushed by oppression, by profound frustration. The good news that the prophet brings is comparable to an extraordinary jubilee, in which the whole earth returns to its creator, to the One who gives life generously. This land produces special, very precious fruits: justice, which is the correct relationship with the Lord and with one's neighbour, and praise, thanksgiving. It is a joyful time, of irrepressible exultation, because the time of desolation and affliction is over.

In the second part of the reading  (vv. 10-11) the prophet intones a song of praise: "I rejoice fully in the Lord, my soul rejoices". These are the words that we also find on Mary's lips (Lk 1:46). How is it that these Israelites who find themselves in the midst of afflictions, are struck by misfortunes, move amid so many difficulties, raise a hymn of praise to God? Because they possess the gaze of the believer. They are so sure of the fidelity of their God, they are so sure that he will deliver the poor, console the afflicted, heal the broken hearts, which see his promises already fulfilled. The prophet speaks in the name of Jerusalem and places the bride's song of joy on the mouth of the city, still in ruins. Nothing has happened yet, yet the prophet's gaze sweeps far beyond the narrow horizons of human pettiness. It invites us to cultivate, even in the most dramatic situations, optimism and hope, based on the certainty that God will carry out his plan for the world.

We are at the end of the Letter to the Thessalonians and Paul, before the greetings, introduces some concluding exhortations regarding community life. He recommends: "Rejoice always!" (v. 16). Joy is one of the characteristic signs of the presence of the Spirit of God in the heart of man (Gal 5:22). It is easy to confuse it with pleasure, the pleasure of alcohol, drugs, immoral life. Paul points out to the Thessalonians the source of true joy. It comes from prayer: "Pray without ceasing, give thanks" (v. 17-18). Joy is the fruit of opening the heart to the promptings of the Spirit who enriches the community with his gifts and is granted by God to those who lead an irreproachable life (vv. 19-22).

Ecclesiastes 11:7-10: Light is sweet, and it pleases the eyes to see the sun. Or why was I not hidden away in the ground like a stillborn child, like an infant who never saw the light of day?  (Job 3:16), "Why is light was given to those in misery, and life to the bitter of soul (Job 3:20). This symbolism, present throughout the Bible, is taken up again in the New Testament, especially by the evangelist John. From the prologue he presents Christ's coming into the world as the appearance of light: In him was life, and that life was the light of all mankind.  The light shines in the darkness, and the darkness has not overcome it(Jn 1: 4-5).

The figure of the Baptist is also introduced with the same image.In the first part of today's passage (vv. 6-8) he is identified as the man sent by God tobear witness to the light. He has such an important mission that, in just two verses, he is recalled three times.

At the end of the first century AD, when John wrote his Gospel, there were still many who professed to be disciples of the Baptist and referred to him as the supreme model of life, even in opposition to Jesus. This is why the evangelist cares to clarify the position of the precursor concerning Christ. The Baptist was not the light of the world, he was only the first who recognized "the true light, that which enlightens every man"(Jn 1: 9). He was not deceived by the flattery of those who, amazed by his teachings and admired for his righteousness, was convinced that he was the Messiah. He remained in his place, remained faithful to his mission. His testimony is offered to us during Advent. As he did with his contemporaries, today he points out to every man the light of the world, Christ:whoever follows him does not walk in darkness, but will have life(Jn 8:12). This call is opportune because the sparkles of deceptive life proposals are innumerable and seductive, but they are flashes that soon fade and reveal themselves to be wicks of death. Only the light of Christ indicates authentic values, those on which one will never regret having staked one's life.

In the second part of the passage (vv. 19-23) a commission is introduced, composed of priests and Levites, sent by the religious authority to get explanations from the Baptist regarding his identity and behavior. In Jerusalem, people began to be concerned about his growing prestige, the emotions he aroused and the hopes he awakened with his preaching. Three times the spiritual leaders of the people anxiously ask him the same question: "Who are you?". On its behalf you are spreading many voices: someone considers him the Messiah, who believes "the prophet" that, according to the promise of Moses, God would raise for Israel (Deut.18:1-5), is also the one who claims that he is Elijah came back to life.

The Baptist is loyal, he does not accept identifications, honors, titles that are not due to him; declares that he is neither the Christ, nor Elijah, nor the great prophet, he simply defines himself as thevoice crying out in the desert: prepare the way for the Lord. It is difficult to imagine anything more fleeting and transient than the voice which, as soon as it has communicated the message, dissolves without a trace. The Baptist does not want the eyes to be on him, but on Christ: "He must increase, but I must decrease" - he will say later (Jn 3:30). Having fulfilled his mission, he is happy to step aside, makes sure that no misunderstandings arise, he shuns any form of "personality cult".

To recognize Christ-light, the testimony of someone who, like the Baptist, able to discover his identity is necessary. Faith does not arise from reasoning or pseudo-revelations, but from listening: “How can they believe - Paul wonders - without having heard of it? And how can they hear about it without someone announcing it? Faith, therefore, depends on preaching” (Rom 10: 14-17). The Baptist also made a journey of faith. He acknowledges that he had progressively arrived at the discovery of Christ: "I did not know him", but after seeing him I began to bear witness to him and to point to him as the son of God (Jn1: 29-34). This spiritual journey is repeated in the life of every believer: one begins with the discovery of the true identity of Christ, then one arrives at the conviction that he deserves full trust and finally one becomes witnesses of one's faith, as Paul affirmed: "I believed, therefore I spoke, we too believe and therefore we speak "(2 Cor 4:13).

In the third part(vv. 26-28) there is above all the call of the Baptist: "Among you stands one whom you do not know". For centuries Israel had been waiting for the Messiah, yet when it saw him coming, it did not recognize him. A veil prevented the eyes of these people from grasping the true identity of Jesus of Nazareth. A thick fog, made up of religious convictions instilled by spiritual guides, clouded the minds and weighed down the hearts. Israel was persuaded to establish a holy community, lived apart and despised other peoples, considered the election a privilege, not a vocation to service, awaited a messiah who would take its side, not to bring salvation to the pagans, but to destroy them.

The Baptist was able to open the eyes of some of his contemporaries and, in this time of Advent, he invites each of us to recognize Jesus as the only light and to avoid "the way of the wicked, which is thick fog" (Pr. 6:23). The last statement of the precursor: "There comes one, after me, to whom I am not worthy to untie the tie of the sandal" (v. 27) is commonly understood as a declaration of humility. Instead, it is an image, a bit enigmatic for us, but clear for the Baptist's interlocutors who knew the law and traditions. Taking off the sandal was a gesture contemplated by the marriage legislation of Israel: it meant appropriating the right to marry a woman that belonged to another (Dt 25: 5-10). By declaring that he cannot untie the thong of his sandals, the Baptist affirms that he has no right to steal the bride from Christ. He is the Messiah; he is the God-with-us who came to celebrate the wedding with humanity. Later the precursor will express himself clearly, without resorting to metaphors: “I am not the Christ, but I was sent before him. Who owns the bride is the bridegroom; but the friend of the bridegroom, who is present and listens to him, rejoices at the voice of the bridegroom. Now this joy of mine is complete "(Jn 3: 28-29).

Advent is the time in which the bride (humanity, the church) prepares to welcome the bridegroom and the Baptist is the friend of the bridegroom, charged with fostering this encounter of love.

“To prepare the way of the Lord’s coming, it is necessary to take note of the requirements of conversion to which the Baptist invites us... One cannot have a relationship of love, charity and fraternity with one’s neighbours if there are ‘gaps’ just as one cannot travel a road with many potholes… We cannot give up in the face of negative situations of closure and rejection: we must not allow ourselves to succumb to the mentality of the world, because the centre of our life is Jesus and his word of light, love and solace. It is He!”