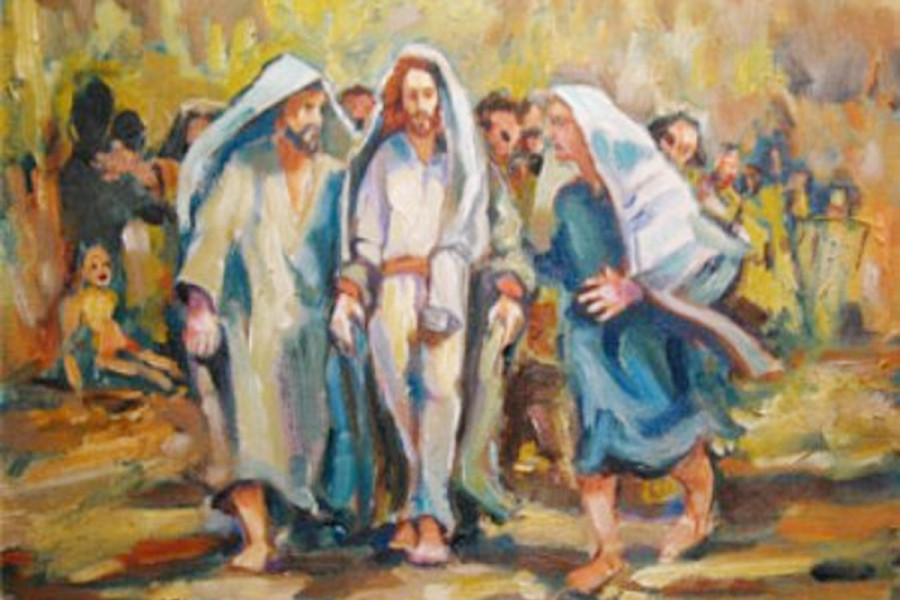 Today’s three readings from the Holy Scriptures echo the Christian virtues of obedience, servitude, and humility that should be part of every Christian life.

The First Reading from the Book of Ezekiel, begins with the powerful vision granted to the prophet while he was living with the exiles in Babylonia. Through the vision, he learns of the rebellion of people and their disloyalty to God. He is called upon to tell the people of the security they have to look for in their God who will be their protector. In the overwhelming presence of God Ezekiel collapses and the Spirit of God enters into him, giving him the strength to stand on his feet and commissioned him to go to the people of Israel and to preach to them. During his commission, Ezekiel was warned that there was a possibility that the people would reject the divine message that he was delivering. His task has been especially to proclaim God’s message to his people. God does not promise him an easy time. But, whether they hear or refuse to hear, they shall know that there has been a prophet among them. Ezekiel obeyed the Lord God and served him. He went to the people with the message from God, preached to them, and the Word of God was rejected by many. Yet he remained faithful to God and continued his work. He was God’s spokesperson and his call was gratuitous. At the same time, God too expects every person to give something to him in return. Our gift to God is our person, our existence, our life, and our words and our actions.

In the Second Reading, Paul tells of the real danger even in serving God where the virtue of obedience can make a person proud and self-sufficient. As we mature in Christ, by the grace of God the Father and the power of the Holy Spirit, we gain greater understanding and knowledge of the spiritual mysteries of Christ and his mystical Body. We are called to always remember that if our spiritual work shines in inspiration because we have the gift of teaching, it is because it is a gift of teaching. It is not because of anything that we can or have achieved on our own. All praise and glory should always be given to the Lord God for his spiritual work that is manifested through us as humble servants. Here Paul speaking about a thorn in the flesh tells the Christians that God provides all of us with a message to the extent of being tormented, to keep a person from being too elated. We are not going to speculate as to what was the thorn because it is not revealed in the Bible. The lesson that is important to learn from this is that sometimes the Lord will allow painful human weakness to torment us in order to keep us humble. As long as we have a weakness, it will discourage us from judging others who have a weakness of their own. Our hearts will tell us that we too are weak in human nature and we should refrain from judging others. There are times when we may be afraid, or when we feel incompetent or inadequate. We can take encouragement from Paul in the cross he bore in his life. He had some very painful handicaps that he felt prevented him from preaching the Gospel effectively. He begged God to take away this affliction but accepted this thorn as part of his sufferings.

Today’s Gospel immediately follows upon last week’s stories of the raising of Jairus’s daughter and the healing of the woman with a hemorrhage. It sets the context of our Gospel readings for the next two weeks in which Jesus will extend the work of his ministry to his disciples. Today’s Gospel describes what many believe to have been the typical pattern of Jesus’ ministry: teaching in the synagogue followed by acts of healing. In his hometown of Nazareth, the people are amazed by what they hear, but they also cannot comprehend how someone they know so well might move them so powerfully.

In this Gospel, we learn some interesting details about Jesus and his early life. Jesus’ kinfolk know him to be a carpenter, an artisan who works in wood, stone, and metal. He probably learned this trade from his father. Family members of Jesus are also named. Mark describes Jesus as the son of Mary, which is an unusual designation. Adult males were more typically identified with the name of their fathers. It is unclear why Mark deviates from this custom.

Brothers and sisters of Jesus are also named. Scholars are divided on how to interpret this. As Catholics, we believe that Mary was and remained always a virgin, thus we do not believe that this Gospel refers to other children of Mary. Some have suggested that these family members might be Joseph’s children from a previous marriage, but there is little evidence to support this. Others explain this reference by noting that the words brother and sister were often used to refer to other types of relatives, including cousins, nieces, and nephews.

This Gospel tells us that Jesus is hampered from performing miracles in Nazareth because of the people’s lack of faith. Jesus is said to be surprised by this. He did not predict or foresee this rejection. In this detail, we find a description of the very human side of Jesus.

This passage unfolds a continuing theme of Mark’s Gospel: Who is Jesus? His kinfolk in Nazareth might know the carpenter, the son of Mary, but they do not know Jesus, the Son of God. Mark is foreshadowing Jesus’ rejection by his own people, the people of Israel. He is also reflecting on and trying to explain the situation of the community for which he wrote. While many of the first Christians were Jewish, Christianity took hold and flourished in the Gentile community. Mark’s community was mostly a Gentile community, who may have been experiencing persecution. By showing that Jesus himself was rejected, Mark consoles and reassures his first readers. He also prepares us to accept this possible consequence of Christian discipleship.

According to Mark, Jesus had been preaching and working miracles in Galilee for many months. He had spent most of the time in towns and villages around the Sea of Galilee. Before leaving Galilee he paid a visit to his home town Nazareth where he was to meet with total disappointment. He went to the synagogue on Sabbath day and began to preach there. His fellow-townsmen had heard about his fame, the extraordinary miracles he had worked around the other towns of Galilee, and the way he attracted huge crowds around him wherever he went and preached. Many of those who heard him for the first time in their own synagogue were astonished at his wisdom and learning. They wondered about the source of his wisdom for they were aware that he had studied to be a Rabbi and they could not understand the miraculous powers he possessed. All these years of stay in the village, they knew him as a person one among them, an ordinary carpenter. They knew his mother and father and all his relatives. They were too familiar with him and knew him too well. They could not even think of the idea that he could be the messiah or anyone extraordinary. They began by being astonished at his preaching but they ended up shutting their eyes to the truth and refusing to believe that he could be what others thought or said he was. For them, he was their neighbor and they knew him too well.

The Gospel of Mark tells us how Jesus took his missionary task seriously and served God the Father in obedience and humility. He was truly the person who carried out the prophetic and messianic mission among his people. It is something each of us needs to remember that we too are missionaries and prophets like him. Every one of us, simply because of our baptism, has been called to be a prophet. We have all been called to spread the message of the Gospel in our families, in our working places, among our friends, in our society. Whatever is happening around us, our task is to prepare to proclaim and defend truth, love, justice, freedom, people’s rights, and dignity. There are some things over which we cannot compromise; there are some times when we cannot keep silent. The people of his village did not hear the message because they were blinded by the familiarity of the person. The same thing can happen to us all the time. God is constantly speaking to us through the people we know, through things that happen to us, through situations in which we find ourselves. Again and again, we do not recognize his voice, his message because he is speaking through someone we know very well, or someone we do not like, or someone who is a total stranger or a foreigner. Jesus now makes a sad comment on his townspeople. “A prophet is only despised in his own country, among his own relatives, and in his own house.” While people in other places greeted Jesus with enthusiasm and hung on his words, his own townspeople, his own family wrote him off, treated him with cynicism. So let us too not be discouraged by our shortcomings – spiritual, psychological, social, physical. God wants us to be his instrument. He will stand by us and give us what we need when we need it.

Today’s readings call us to awaken our hearts so we may see the divine truth beyond the human appearance of those we know. It is hard to understand the irrational opposition of the people of Nazareth during the visit of Jesus to his village and of the Pharisees and scribes later. The people of Nazareth had all wonderful reports about Jesus and on reflection could have seen in him the true messiah. Instead, they turned against him in bitter hatred and then decided to put an end to his career. Luke tells us that they wanted to throw him down the cliff of the mountain. There was the tinge of pride and envy that made them refuse to accept him. Their hatred towards him made them close their eyes against all goodness he possessed. This is a typical human situation that is repeated later and led him to the cross. He was obedient to his Father and was humble before him. This experience exists even today when the church is challenged grossly by the powers of the world for the good work it is doing. The challenge that Jesus faced two thousand years ago is alive even today to all his followers as we stand for values of truth, justice, and love. We need our faith to grow as the readings of today tell us. When we will have attained that elevation of spiritual knowledge and understanding, our faith will bring us to the realization that God is manifesting Himself all around us, in ways that we have never seen before.