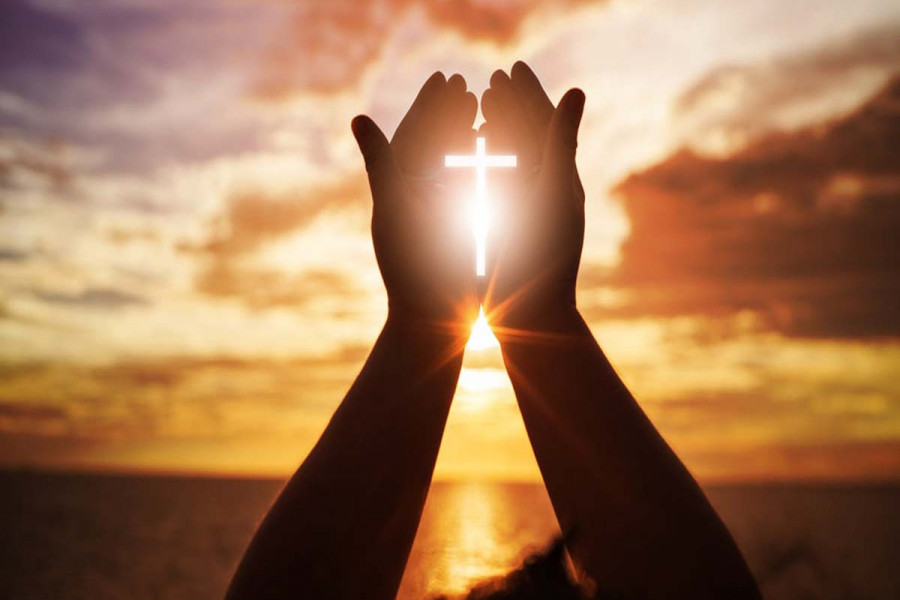 The Way of the Messiah

The Word of God this Sunday defines the meaning of life not in terms of personal gain, self-interest and shallow success, but rather in terms of one’s sense of duty, commitment and fidelity. Ultimately, it is our ability to live life’s bitter disappointments that determines our Christian discipleship. On this twenty-fourth Sunday, we honor Christ the son of God who humbly accepted the will of God by generously accepting to carry his cross. In the prescribed Gospel of today, Jesus asks his apostles the question, “ Do you know who I am? It is not because Jesus did not know who he was, but he wanted the apostles to know who he was- the Christ, and understand what this identity truly meant. The incident takes place in Caesarea Philippi. The stop at Caesarea Philippi Marked a transition point in the life of Jesus, His ministry to the public was over. Jesus now set his eyes towards Jerusalem, where he would be betrayedCrucified and killed. But before all that could happen, he wanted to get his close associates on board as regards who he was and what he came to the world for.

The suffering servant of Yahweh is assured of God’s help.

Our first reading for this week from Isaiah is one of the “Suffering Servant Songs.” It is the prophecies about Jesus Christ the Messiah who would vindicate the faithful exiles of Israel and bring them back to their homeland. Isaiah, however, describes this hero figure, not in the imperial language of power and dominance. He speaks of a humble suffering servant instead. He was not rebellious but, on the contrary, was willing to do the Father‘s will by proclaiming and securing salvation for humanity. Christ proved his love for us and, faith in his father by willingly accepting suffering and death.

The Messiah is the one who “would make no resistance, who would not cover his face against insult and spittle.” Like Zechariah who foretells the king “riding on a donkey”, Isaiah goes against the grain of popular hopes and expectations. The Messiah would not follow the script of the empire. He would come as a poor and humble servant in order to minister at the thresholds of human vulnerability. For the Jewish exiles hoping for liberation, this prophecy was a shocking revelation.

James teaches that faith must be demonstrated in one’s works.

The second reading is a challenge to each one of us to be practical Christians as Christ was. It presents us with the reality of what it actually means to be a true Christian. James reminds us that: “Faith without good work is dead or useless.” While reflecting on today’s message we recall these words of Jennifer López while appealing for charity on behalf of sick children. She says: “Miracles do not come easily…behind every miracle, there is a generous and charitable heart.” This generous and charitable heart is a heart of practical faith in action. So, God needs our prayer, faith as well as our practical actions in order to achieve the next miracle for others. Christ proved his love for us by being practical. He prayed and also offered his life for us on the cross. This is practical Christianity that speaks volumes.

Today’s reading is the turning point in Mark’s Gospel. In the presentation of the life and ministry of Jesus found in the Gospel of Mark, the deeds of Jesus have shown Jesus to be the Son of God. Yet many, including Jesus’ disciples, have not yet realized his identity. In today’s Gospel, Jesus asks the disciples for a field report by asking what others say about him. He then turns the question directly to the disciples and asks what they believe. Peter speaks for all of them when he announces that they believe Jesus to be the Christ.

The text of the Gospel of this 24th Sunday of ordinary time presents the first announcement of the Passion and death of Jesus, to the disciples, Peter trying to eliminate the Cross and the teaching of Jesus concerning the consequences of the Cross for those who wish to be His disciples. Peter does not understand the proposal of Jesus concerning the Cross and suffering. He accepted Jesus as Messiah, not as a suffering Messiah. Peter was conditioned by the propaganda of the government of that time which spoke of the Messiah only in terms of a glorious king. Peter seemed to be blind. He could not see anything and wished that Jesus could be like him, Peter desired and imagined. Today we all believe in Jesus. But all of us do not understand him in the same way. Who is Jesus for me? Today, which is the most common image of Jesus that people have? Today, is there propaganda that tries to interfere in our way of seeing Jesus? Who am I for Jesus?

In our gospel today Jesus was confirming the prophecy of Isaiah before Peter interrupted him. Jesus knew that this was the will of God for him and was willing to show his practical love for humanity. So, as the Suffering Servant and Messiah, his core mission was to redeem humanity through his own suffering and death. However, Peter did not understand this. Peter’s case today is a typical example of how a godly and spiritual person could be manipulated in order to stand against the will of God. Jesus does not mean that Peter was a devil, but he rebuked the voice that spoke through him.

The total understanding of the following of Jesus is not obtained from the theoretical instruction, but from the practical commitment, walking with Him along the way of service, from Galilee to Jerusalem. Those who insist on maintaining the idea of Peter, that is, of the glorious Messiah without the cross, will not understand and will not succeed in assuming an attitude of the true disciple. They will continue to be blind, interchanging people for trees (Mk 8:24). Because without the cross it is impossible to understand who Jesus is and what it means to follow Jesus.

Peter declares that Jesus is the Christ, and Jesus teaches that those who would follow him must take up his or her cross. The road of the following is the way of dedication, of abandonment, of service, of availability, of acceptance of conflict, knowing that there will be the resurrection. The cross is not an accident on the way but forms part of the road. Because in the world, organized beginning with egoism, love and service can exist only in the crucified! The one, who gives his life in the service of others, disturbs those who live attached to privileges and he suffers.

What follows is an unexpected lesson for Peter and the other disciples. Peter is praised for recognizing the Messiah. He is called the rock. However, the rock can be either the cornerstone or the stumbling block. So long as Peter lives out the call to emulate the Suffering Servant, he is the rock of strength. But if he refuses to be part of Christ’s suffering, he becomes the rock of offense. Indeed, Peter is soon rebuked and called a stumbling block precisely because he wants to remove the cross from the mission of Christ and Christian discipleship.

Peter has a steep learning curve on his way to be the foundation stone for the Christian community. Like Paul falling from his high horse, Peter also has his pride and ambition checked. He learns to carry the cross as discipleship of trust, powerlessness, vulnerability and self-sacrifice. He learns to be led to places he’d rather not go. This is not simply geography but above all a metaphor for vulnerable trust which is an essential quality for Christian living and witness.

A few moments before, Peter identified Christ as the son of God by the power of the Holy Spirit. The next moment he was used by Satan in order to oppose God’s will. There are two reasons for this. First, Peter could not believe that Jesus could descend so low as to allow himself to be killed by human beings. Second, Peter set his mind on what he will lose should this happen. He thought he will lose his position in the earthly kingdom which they thought Christ had come to establish. So he did not want to hear Christ talk about suffering and death now. However, he did not know he was standing against the will of God.

Like most of us today, Peter knew who Jesus was but was not ready to accept the reality that faced him. He wanted the crown but denies the cross that must come before it. Like Peter, most times we do not want to face the realities of our life. Rather, we want to deny them. We only want to hear that there will be no problems or difficulties in life. We want to reduce or run away from our cross and yet, we want to follow Christ. My dear friends practical Christianity means faith in action. It means accepting to carry our cross humbly and patiently while relying on the same grace that helped Christ. It is by carrying his cross and, dying on it that Christ demonstrated his practical love, charity, generosity and faith in action for us. So, he wants us to do the same. This is why he tells us today: “If anyone wants to be my follower…let him carry his cross and follow me…Anyone who wants to save his life will lose it, but anyone who loses his life for the sake of the gospel will save it.” The good news is our crosses will not last forever, but will definitely end up in triumph.

Then Jesus began to teach his disciples. However, the words he spoke must have been shocking to the disciples. He told them that the Son of Man would suffer and be rejected by the elders, the chief priests and the scribes. He then would be killed. Yet he would rise after three days! Imagine what was going through the disciples’ minds and hearts as they listened to Jesus. They must have been shocked, dismayed and afraid. And what did Jesus mean when he said: “He would rise on the third day?”Peter could not tolerate hearing all of this. He took Jesus aside and rebuked him for saying all these wild things. Jesus looked directly at his disciples and then he turned back to Peter and said, “Get behind me, Satan! You are not thinking as God thinks but as human beings think!”

Today Jesus asks us: “Who do you say that I am?” Take a few moments and seriously ask yourself: Who do I say Jesus is? Who is he to me? Is he simply a man that lived over 2,000 years ago? Or is Jesus real to me? Ask yourself: How do Jesus and his teaching and example of self-sacrificing love, affect my daily choices and actions?

Answering Jesus’ question may clarify for us who Jesus is for us today! Hopefully, we will reiterate Peter’s response: “You are the Christ.”

Lord Jesus, we thank You for the word that has enabled us to understand better the will of the Father. May Your Spirit enlighten our actions and grant us the strength to practice that which Your Word has revealed to us. May we, like Mary, Your mother, not only listen to but also practice the Word.