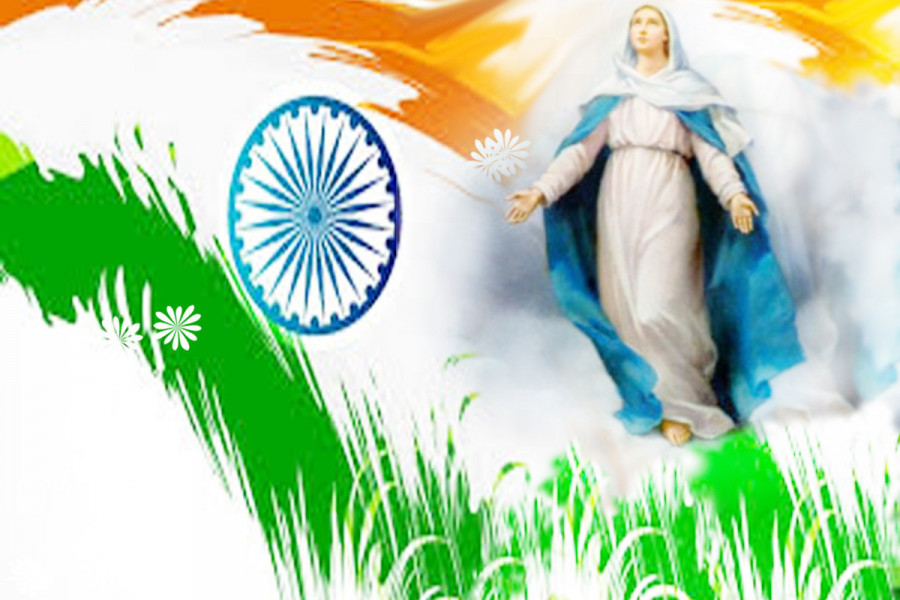 We Indians on August  15 will be celebrated in commemoration of two major events - one being a heavenly event relating to the Blessed Virgin Mary’s Assumption into heaven, and the other India’s political independence or freedom.

As both these events are being celebrated, all the citizens rejoice and seek God’s blessings on the country, its rulers and people. Indeed, all people shed away differences and barriers of all sorts, and feel emotionally united. This twin celebration contributes to the bonding of minds and hearts, leading to further strengthening the spirit of patriotism. The feast of Assumption of Blessed Virgin Mary, the wife of St. Joseph and the mother of Jesus, did not die while she was living on the earth. She was bodily taken up by God into heaven and since she was taken into heaven by God, the event is named Assumption. In theological terms, Mary remained immortal while she was on this earth. And “We Christians believe that Mother of Jesus was free from sin and that death is the fruit of sin. She was sinless, Immaculate and therefore rightfully taken into Heaven and that Feast we celebrate on Independence Day. She is already there where we all must go someday.”  The assumption is celebrated by not only the Roman Catholic Church but it is also celebrated by the Anglican Church, Eastern Orthodox Church and Oriental Orthodox Church.  “This is a double celebration for us. It is on this day that India got its Independence and we are grateful to God. We believe God is the Lord of History and it is He who combined these two events.” “On Aug 15, we hoist the flag outside Churches and also place the flag on the altar and pray for our country, our motherland.” On this day we pay our floral tributes to the Father of our Nation and also remember with a sense of gratitude those hundreds of thousands of freedom fighters who sacrificed their lives to liberate the Bharat Mata from the shackles of the Imperial Rule. We are happy about the coincidence of our Independence Day with the Feast of Assumption of Our Lady. While the first one is symbolic of political liberation though in the mind of Mahatma Gandhi it was much more than that. The second one is complete liberation from anything that binds us. From 1947 onwards Indian Church became doubly happy as Aug 15 became the Independence day and in its liturgy, prayers and hymns for the Day a special thanksgiving prayer for the Independence of India.