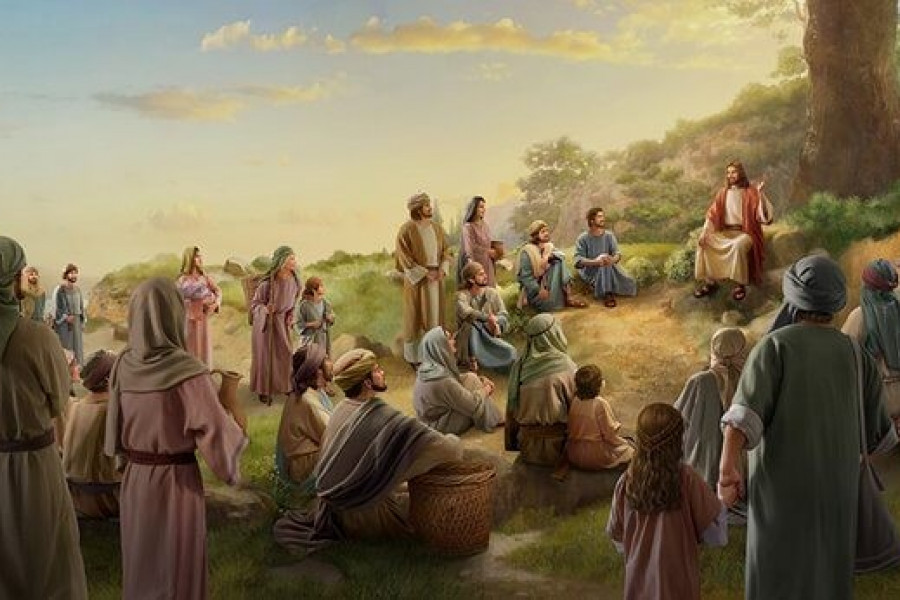 The First Reading, Sirach 15:15-20, stresses the responsibility that flows from human freedom of choice. In line with Ben Sirach’s identification of the Law with Wisdom, it insists on the necessity to observe the commandments (of the Law) if one is to obtain life. Its uncompromising tone seems to have been selected as a kind of foil or contrast to what is to follow in the Gospel.

The Second Reading, 1 Cor 2:6-10, reflects Paul’s consciousness that what God has in store for us surpasses the capacity of ordinary human knowledge or imagination to grasp. It requires a ‘hidden wisdom’ communicated only through the gift of the Spirit. It is a consoling passage for those troubled by what life beyond death might involve.

The Gospel reading invites all to enter into the heart of Jesus’ Sermon on the Mount.

The evangelist, in locating the first discourse of Jesus on the mountain, wished to draw the attention to the readers the image of Moses giving the Law on Mount Sinai (Exodus 24:9). This teaching takes place as Jesus is seated, a position that recalls the attitude of the Jewish rabbi interpreting Scripture to his disciples. It is difficult to capture the richness of the themes that run through the long speech, as some scholars prefer to call it “the evangelical words of Jesus"(cf. 7:28).

Jesus insists that he has not come to abolish ‘the law and the prophets’ but to ‘fulfill’ or bring them to completion. It is important to note how Jesus ranges ‘the prophets’ alongside ‘the law’. The prophets indicate God’s will for the messianic age. Jesus will fulfill the law by interpreting it in the light of the priority Israel’s prophets gave to values such as justice, mercy and faith in human interrelationship (see Matt 23:23). This will entail a ‘righteousness (‘virtue’ is a lame translation) ‘deeper’ than that practiced by the scribes and Pharisees.

There follow what we might call six ‘case studies’ illustrating this deeper righteousness. Four are cited in this week’s Gospel, two left for coming Sunday. As an authoritative interpreter, Jesus cites a ruling from the Torah, appealing to Scripture, and then modifies, radicalizes, or extends it in some direction. What he cites is usually a prohibition (‘Thou shalt not …’). What he sets over against it is a pronouncement that seeks to go beyond mere external restraint to plant the value enshrined in the prohibition deep within the human heart.

Mt 5.17: Jesus fulfilled the Law and the Prophets. It's like saying that Jesus is the measure to enter the kingdom of heaven: in Him, anyone, great or small, depends on the choice of letting ourselves be led by one who fulfills the Law and the Prophets. Henceforth the law, the teaching of the prophets, the justice the salvation must bond with Him.

The reader knows that in the Old Testament these truths were seen like separate and distinguished among them: the Law contained the will of God; justice expressed the human engagement in order to observe the contents of God’s will in the Law; the Prophets, exegetes of the Law, were the witnesses of the implementation of the fidelity of God in the history. In the person of Jesus, these three truths are unified: they find their meaning and value. Jesus declares openly that He has come to fulfill the Law and the Prophets.

The first one regards the instruction of Jesus, then it does not change the contents of the Law and the Prophets and whose function was didactic-instructive; indeed, Mathew considers the Prophets like the witnesses of the commandment of love (Hos 6:6 // Mt 9:13; 12:7). That Jesus accomplishes the instructions of the Law and the Prophets can mean that “manifest them in their meaning”, “brings to complete expression” (U. Luz); it is from excluding the meaning of “to invalidate”, “to abolish”, “not to observe”, “to break (to smash)”.

The second level refers to the actions of Jesus: does the Law itself change or not? In this case to fulfill the Law could mean that Jesus, with His behavior, adds something that lacks or brings to fulfillment. It perfects the instructions of the Law. In more concrete terms: Jesus in His life, with its obedience to the Father, “accomplished” the requirements demanded from the Law and the Prophets; after all, He observes the Law completely. More meaningfully: through His death and resurrection, Jesus has fulfilled the Law. To us it seems that the emphasis is placed on the behavior of Jesus: with obedience and practice, He has fulfilled the Law and the Prophets.

Mt 5:19: Jesus who teaches the will of the Father and the fulfillment of the Law. Jesus is master in obedience and the practice. It is interesting to note that Mathew uses this verb to complete, to fulfill, only for Jesus: only He completes the Law, only His person introduces the characteristics of the fullness. Here is its authoritative invitation, that becomes a “shipment”, a task to complete the Law in fullness: “I say to you…” (Vv. 18, 20).

Mt 5:20 Jesus fulfills justice. The addressees of this warning, in the end, are the disciples; it is addressed to us. Sure the will of God is drowned to the Law, but he is Jesus who incarnates a new way to put justice in practice. That one of the Scribes and the Pharisees have been aligned to the justice of the men, that one preached from Jesus, instead, demands one justice more substantial, significantly greater than that one practiced in Judaism. In what consists this “more” our text doesn’t define immediately; it is necessary to read the continuation of the instruction of Jesus.

Mt 5:20 The radicalism of the justice preached from Jesus. There is no tension between the single garnishments and the commandment of love. The instructions of Jesus become binding, in line with the instructions from the Old Testament. For Jesus there is no opposition between the single prescription of the Law and the commandment of love: they are to be considered in a harmonious relationship because in their entirety the will of God is offered to us (U. Luz).

Mt 5:23-25: How to relate between siblings? In the completely new perspective of the Sermon on the Mount, every lack of love towards the next one involves the same guilt as a homicide. In fact temper, anger, insult are tempered by an undivided heart of love. For Jesus, one does not break the single Law only by killing, but also with all those actions that try to destroy or make the other useless.

It is not alone a question of asking forgiveness: it is urgent to reconstruct the fraternal relations because the good of the brother is my good. Jesus says: “Go first” … In the first place, before praying, before donating, before that the other make the first step, is the movement of my heart, of my body towards the other. Such going towards the other has the purpose of the resetting of the wound; a movement that stretches to reconciliation.