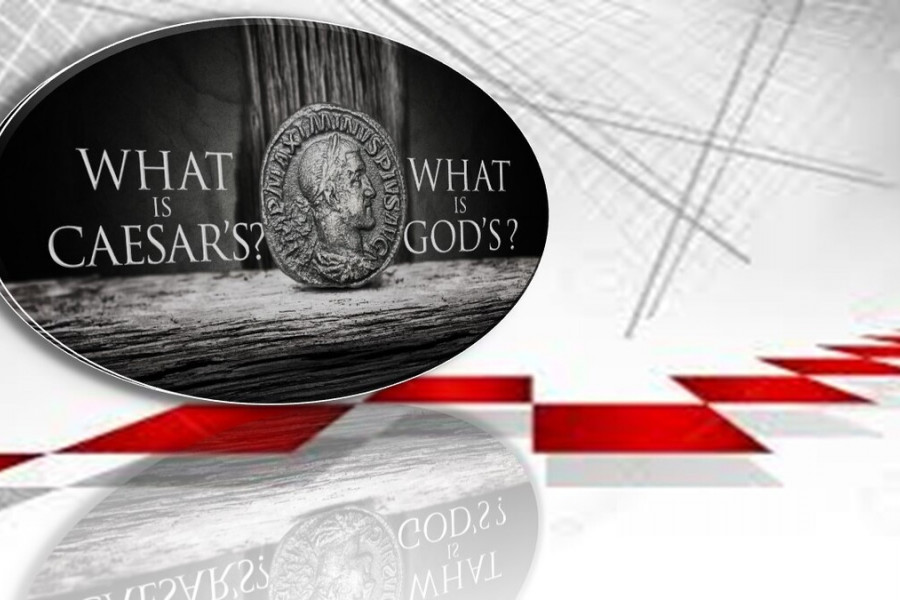 In this passage the prophet makes a revelation from God that at first sight sounds amazing: Cyrus, a pagan king who does not know the Lord (Is 45:4) is called "chosen" (Is 45:1), indeed the Hebrew term is "anointed", messiah, a title normally reserved for the king of Israel (1Sam 9:26). But God's plans are "inscrutable" (cf. Is 55:6-9) and he is the Lord of history: "there is nothing outside of me. I am the Lord, there is no other "(Is 45:5). "For the love of Jacob, my servant, and of Israel, my chosen one, I have called you by name, I have given you a title, although you do not know me" (Is 45: 4). These words clearly show that the initiative belongs to the Lord, who acts in full freedom, outside of any human initiative. After all, who can boast of having given advice to God? (cf. Is 14:13).

The second reading presents us with the beginning of the first letter to the Thessalonians. Paul and his companions Silvanus and Timothy wish "grace and peace" "to the Church of the Thessalonica which is in God the Father and in the Lord Jesus Christ" (1Thes 1:1).

The expression of greeting is repeated at the beginning and at the end of the Pauline letters; it can be read as a stereotyped formula, or in the depth that the two words, grace and peace, take on in the biblical horizon.

The essential characteristic of the Church is also underlined in the greeting: being "in God the Father and in Jesus Christ". The mission of the Church is to spread the Gospel, a work possible through the word, supported, however, by the divine power, namely the Holy Spirit (1Thes 1,5).

Election is a free gift from God and also for the disciples of the church of Thessalonica what was said in the first reading is valid: the initiative is God's, he must be answered, he must serve as a model of the "servant Israel", to whom one Jesus Christ is conformed.

With the passage from today's Gospel opens the Matthean account of a series of discussions between Jesus and his opponents that will cover the entire twenty-second chapter of the First Gospel. It begins with a diatribe with the Pharisees and the Herodians (Mt 22,15-22), then moves on to that with the Sadducees (23-33), up to that with a doctor of the law (34-40); the last confrontation will still be with the Pharisees (41-46).

In the first part of the passage we read today three groups of Jews are named: the Pharisees, Sadducees and Herodians, active in the time of Jesus. The Herodians were the supporters of King Herod and in the Gospels, they are usually named together with the Pharisees; there is no clear theological thought attributed to them. The Pharisees and Sadducees, on the other hand, qualified themselves for a different and incompatible attitude with respect to the value of the written Torah (Pentateuch) and the oral Torah, which we could call Tradition. Very schematically, we can say that the Sadducees, the group from which the priests of the temple came out, argued that one had to stick to the letter of the written Torâh; the Pharisees, on the other hand, accepted the development of the oral Torah, which they believed was also contained in the revelation to Moses at Sinai.

The trap is well thought out: whatever answer Jesus gives; this will be backfired. If Jesus is in favour of paying taxes to the Roman emperor, an idolatrous pagan, he will fall short of what is prescribed in the Book of Deuteronomy: Listen, Israel: the Lord is our God, one is the Lord. (Dt 6: 4). In addition to contravening the law, Jesus' response would be to recognize the legitimacy of the occupation and to alienate the sympathies of those who saw him as a liberator. On the other hand, if Jesus responds with an invitation not to pay the tribute, his position is understood as a political rebellion and the presence of the Herodians ensures his prompt arrest.

The attack on Jesus remained fruitless. Not only have they failed to catch him out, they have been caught out, deserving the title of hypocrites and tempters. The Pharisees and Herodians leave Jesus as the devil left him (Mt 4:11) in the desert after the temptation to worship power. But if in the desert after the devil left him, the angels approached Jesus to serve him, here failure does not stop the institution that now sends the economic and religious aristocracy to attack: the Sadducees.

The lordship of God is at the heart of the first reading as of the gospel. The prophetic passage underlines the absolute freedom of God and his uniqueness ("I am the Lord, there is no other": Is 45:6). The Gospel shows the relativization of human authorities, even the emperor, who at the time was deified, before God. If the state authority can demand taxes and tributes (cf. Rom 13: 7), if given respect (Rom 13,7), fear must be reserved for God (1 Pt 2:17), creator and lord of every man.

The words of Jesus' response to his interlocutors are particularly important in their second part, when Jesus adds - unnecessary because not required by the question that was asked - the affirmation that concerns "giving God what belongs to God". This claim means that, if the emperor demands for himself what belongs to God, such as adoration, the Christian - mindful of the word that says: "We must obey God rather than men" (Acts 5:29) - not he is required to give it to him, indeed he can even face martyrdom, showing that only God is the Lord of life.

O God, you are the King of history and you make everything work together for the good of those who love you: even the most difficult trials, our exiles. Grant us your Spirit, so that we can see the complex events of history in the light of faith, seeing in them your loving hand that realizes the wonderful plan of salvation for all humanity. We thank you for calling us to collaborate on your project and asking us to know how to assume our responsibilities in the civil and political sphere. The word of your Son infuses us with an increased awareness: human power can neither be demonized nor deified, but the orientation of our freedom must be manifested in it.

We thank you for having made us in your image and for having revealed our Christian vocation to us: it commits us to answer for the moral quality of the big and small choices in everyday life. Thank you because with your help we will be able to live all this, giving back to Caesar what is Caesar's and to you, O our God, what is yours. That is our own lives!