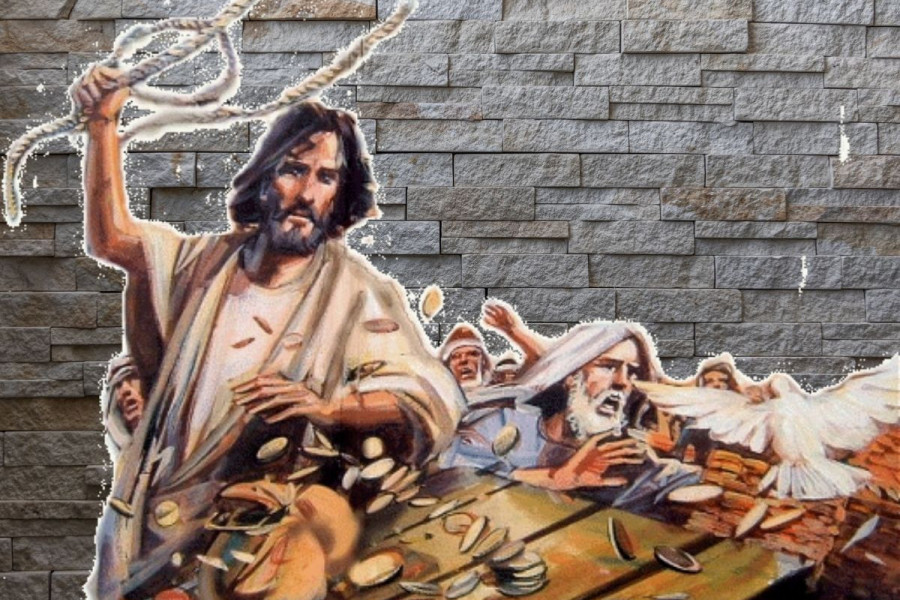 The readings for the third Sunday of Lent highlight the theme of living in right relationships with God and fellow members of one’s community. Since communitarian living often poses challenges, today’s liturgy provides a valuable insight on how the harmony with God and one another can be achieved and maintained.

Our first reading tells about the covenant God made with Israel by giving them Ten Commandments to live by.  God gave them to Moses so that his chosen people will live by the norms given by him.  They had to observe them faithfully in order to live the covenant fully. Here Moses receives the Ten Commandments from God at Mount Sinai, which became the foundation of Israel’s new relationship with God. These commands were the basis of the religious life of the chosen people of the Old Testament. Already God had protected the people in the desert by nourishing them with food and protecting them from enemies.  Now he gives them these commandments to protect and build up their spiritual bond with God.  Therefore he makes a demand on them that God must come first in their lives before anything else.  It is not the unknown God but the one who has revealed his name to them and whom they have promised to hold in total reverence. This is the God who brought them out of Egypt. It presents the core of the Israelite Law, known as the “Decalogue”, or simply “the Ten Commandments”. Ancient Israel’s biblical tradition held that Moses brought the two stone tablets from the mountain with ten short instructions intended as the essential guide for living righteously that is in being in the right relationship with God and with fellow members of the covenant community. The Decalogue and the other precepts contained in the Law, played a central and fundament role in shaping the lives of the Jewish people, as this Law transformed a band of Hebrew slaves, fleeing the land of slavery, into a nation of God’s people, his “treasured possession” (Exod 19:5). Having delivered his people from slavery in Egypt, God offered them the Law, expressed through the commandments as a “constitution” for the community, meant to guide and orient their lives in a new situation of freedom and in the new land to which they were going. The first three of these commandments define the essential aspects of the covenantal relationship between God and the people, and can be defined as the “vertical” aspect of the covenant. The remaining seven precepts define the relationship between the people themselves, and constitute the “horizontal” dimension of the covenant. By observing these commandments in their daily life, the people were expected to honour their God and thus be faithful to their new identity.

In our second reading Paul calls us to embrace divine wisdom though the world may see it as foolishness.  He tells them that we preach Christ crucified. He tells them that God’s weakness is greater than human strength. It is from Paul’s letter to the Corinthians, where the apostle attempts to restore order in the divided community. The Christian community in Corinth was deeply disordered and riddled with numerous divisions, dissensions, and rivalry. This was far from the model of the Christian community as the harmonious and unified body of Christ, which was the ideal, pursued and taught by Paul. To address this difficult situation and move towards reconciliation, Paul did not use complex theological and philosophical arguments. Rather, he appealed to the example of Christ crucified, and to the “scandal” and “foolishness” that the cross appeared to be to Jews and Gentiles alike. Paul tells the Corinthian converts that the message of the cross is foolishness to those who are perishing. But for those who are saved, it is the power of God. The message of the cross is the message of love of Jesus that was summarized in two Commandments, namely the love God and loving ones neighbours. Paul tells them that he and his companions proclaimed Christ crucified. He is the power of God and he is the wisdom of God.  Paul in fact could not have found a more striking expression for the inscrutable nature of God.

Background on the Gospel Reading

In today’s Gospel we read about how Jesus overturned the tables of the merchants and the moneychangers in the Temple at Jerusalem. In order to understand the relevance of Jesus’ action, we must learn more about the activities that were going on in the temple area. Worship at the Temple in Jerusalem included animal sacrifice, and merchants sold animals to worshipers. Moneychangers exchanged Roman coins, which bore the image of the Roman emperor, for the temple coins that were needed to pay the temple tax.

Jesus’ action at the Temple in Jerusalem is recorded in all four Gospels and is often understood to be among the events that led to Jesus’ arrest and Crucifixion. The Gospel of John, however, places this event much earlier in Jesus’ public ministry than do the Synoptic Gospels. In John’s Gospel this event occurs at the very beginning of Jesus’ ministry, after his first miracle at the wedding feast at Cana.

We must read the Gospel of John carefully, especially in its presentation of Jesus’ relationship to Judaism. The Gospel of John tends to reflect greater tension and animosity between Jesus and the Jewish authorities than the Synoptic Gospels. The Gospel of John was the last of the four Gospels to be written, and its narrative reflects the growing divide between the Jewish community and the early Christian community. Thus, greater emphasis on the distinction between Christianity and Judaism is found in John’s Gospel.

Reflecting upon the destruction of the Temple of Jerusalem (A.D. 70), John recalls Jesus’ cleansing of the Temple and uses that story to interpret this later event. John explains to his audience, an early Christian community, that temple worship would no longer be necessary because it was surpassed in the passion, death, and Resurrection of Jesus. With greater frequency than the other Evangelists, John intersperses post-Resurrection reflections of this Christian community in his narrative.

In the gospel Jesus reacts with anger to abuses in the Temple, which he perceives as the violation of the covenant and shows himself as the Lord of the Temple. He drove the traders out of the Temple and predicted that he himself would be the Temple of the new people of God. In Jesus’ day, the Jerusalem Temple was the centre of the religious life of all pious Jews, and the only place where sacrifices to God could be offered. For this reason, the Temple was necessary for maintaining the right relationship between God and his people. To his dismay, arriving at the Temple, Jesus found this sacred space serving a very different purpose. The Temple had become primarily a market place, a hive of commercial activity designed to support a formal and ritualistic worship. The people coming from great distances to celebrate important feasts, such as the Passover, could not bring the animals required for the sacrifice with them. Therefore, the Temple market catered for the needs of the pilgrims supplying the animals and changing foreign money to the currency accepted in the Temple. All this brought great profit to the owners of these services, mostly the Temple priests, who accepted and oversaw the business through the Temple guards. This situation appeared perfectly normal to most Jews. However, Jesus, as God’s Son, saw what others did not see.

Certainly, this action of Jesus was an open defiance of the authorities and naturally led to the building of hostilities with them that ultimately sealed his fate. But for Jesus this was the stand he took for religious practices and the need to protect his Father’s House.  He directly told them that the Temple is primarily the house of God and a place meant for prayer. This had its reaction on his disciples and people standing there. The disciples did not understand the entire event immediately and they could find its meaning only after the resurrection. Yet they did not go away from him nor did they ask him about it.  They had the confidence in him as he was their leader and master. As regards with the people he would not trust himself to them because he knew them all.  He knew that to many of them he was a wonder-worker or a miracle worker.

The magnificent Temple, a material structure, was insufficient and failed in connecting God and the people. Jesus, as God’s living presence in the world, became a new way of connecting with God, a new way of communication and reconciliation, a new way to God. Jesus took the role of the new and living Temple, one in whom the divine presence and glory abides. He would be the new and living link between God and his people.

The signs that Jesus gave caused many to believe that somehow God is with Jesus but they failed to see his divinity, that he was the Son of God.  To recognize that God is within Jesus, that Jesus is God, would have placed a new understanding of his presence in the world and would have given a new meaning to his preaching the Word. The purification of the temple is a Messianic gesture. Its purpose is to indicate the beginning of the final stage in the history of man´s relationship with God.

Today’s readings invite an inward look at the Christian community, and the relationships within it. The first reading implies that Christian identity must be shaped by God’s word and follow God’s ways. This was true for the people of Israel and remains true for the followers of Jesus. From the very beginning, Christian communities were not free from internal conflicts and disunity. Seeking solution to this problem, Paul proposes to focus on Christ’s cross as the centre of the community. The cross can bring unity to the Christian community in a manner analogous to the Torah which stood at the core of the Israelite community. The Gospel reading reinforces Paul’s message showing Jesus as the new Temple who establishes a new relationship between God and the people. That new relationship is maintained through faith and adherence to God’ incarnate Son. Christians need Jesus as he is the only way to the right relationship with God. The Psalmist had the same idea while alluding to the Law, describing it as “more to be desired than is gold, even much fine gold.”